Mick Fleetwood: 50 years since the Marquee Club shaped and changed the course of my life


It was there I made life-long friends, saved sweethearts and survived fights. It was there I went from complete obscurity to learning the tools of my trade from the musical masters of our time.

The Marquee was the jewel of the London clubs. All the musicians wanted to play there. It was a jazz club until the brilliant, groundbreaking management of John Gee, who guided its metamorphosis into the seminal rock and roll/rhythm and blues club whose influence is still relevant today.

I have a first, stomach-turning memory of playing the Marquee with my band The Cheynes. We had no following and it was a miracle to have been asked to back the legendary blues star Sonny Boy Williamson. This giant of a man played a tiny harmonica and dressed in the coolest suits, all mismatched fabrics in wild designs. We had studied his albums and learned his every note by heart to prepare for this honour.

On the night Sonny Boy went totally off book, dropping into the middle eight at different places. We just didn’t get it and kept trying to play the song the way we had learned it. We even tried to correct him by corralling him back to the way the song was supposed to go.

This did not go over well. He stopped playing in mid-song and bawled us out in front of the audience for not following his lead, not listening or watching for his signals.

The Marquee Club relocated to Wardour Street, where I saw the greats: Zoot Money and Cyril Davies, Georgie Fame and the Blue Flames, the Stones, Jeff Beck, Jimmy Page, Mick Taylor, The Yardbirds, The Moody Blues, John Mayall And The Bluesbreakers just to name a few. So many screaming fans, crammed into that tiny sweatbox!

Early Fleetwood Mac was actually banned for a time from playing the Marquee. We were opening for John Mayall And The Bluesbreakers. Jeremy Spencer and I had a running joke at every gig involving a sex toy (that we had named Harold) which would be ceremoniously hung on the top of my bass drum for the duration of the show.

People loved Harold but one night, Jeremy appeared on stage with Harold dangling out of his trousers! Suffice it to say that we were severely reprimanded and Harold would never again make an appearance at the Marquee. (Harold’s showbiz life came to a crashing end at an American Southern Baptist college, where we were very nearly arrested for his performance. Poor Harold was too much for them and, much to my wife’s chagrin, he ended his days on show, sitting on our pine corner cabinet).

It’s a funny thing, going back to an iconic place to commemorate the fact that something great happened there.

I remember walking into the Marquee on a rainy day in the early 1980s like a ghost, wandering through a unique moment in time. I was there at the club’s inception and became a part of its history. This was where I came up the ranks, this was where I met John McVie, this was where the rhythm section of Fleetwood Mac was born. I hold it in my heart with utmost gratitude.

Mick Fleetwood joined the Sunday Express (UK) as a guest columnist beginning with his first column on February 16th . Previous columns below: 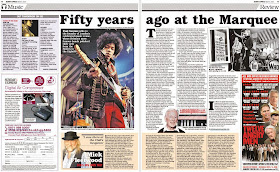