In the early days of Fleetwood Mac we liked to push the naughtiness envelope. - Mick Fleetwood


IT'S NOT exactly breaking news, my many dalliances with addiction in my life, but one hasn't been well-documented, and that's my absolute love of fashion.

Not so much fashion per se, rather my personal pursuit of theatrical self-expression through my clothes and what I present to the world.

Here's a riddle for you: What can a broke, 18-year-old, 6ft 6in beanpole find to wear in a ready-made shop? Answer? Absolutely nothing. I was left to scour the markets, usually ending up at the Army and Navy surplus store.

Then I met Rod Stewart and the incredible blues artist Long John Baldry who, incidentally, was 6ft 7in. Imagine my initial envy, seeing this tall man in garb I'd only dreamt of.

I played with Rod for two years and I attribute much of my fashion savvy to him and John. Not only were they renowned for their style, they shared their secrets, showing me the ways of bespoke tailoring on the cheap in London's East End.

I saved up for one thing that fit properly - a pair of trousers, a shirt - at a time. I was hooked. Finally, I had clothes that fit.

Then I acquired a bolt of Levi's denim (fallen off the back of a lorry) and had my first pair of jeans tailor-made. I thought I was in heaven. They were my prized possession until my poor mum washed them and then put them in the dryer.

She actually cried when she saw how distraught I was. I spent the entire day on the verge of tears, lying in the bath, trying to stretch them back to their original size, to no avail.

I still love having my jeans tailor-made (at The Stronghold in Venice, California) but trust me, I'm a stickler for pre-washed, pre-dried denim.

I really wanted a costume that stood out when I played gigs.

It had to be original, not too hot to play in and cheap. 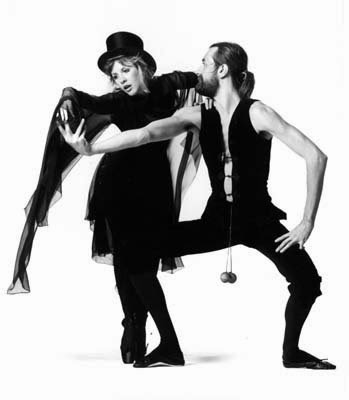 I still had my school gym kit and fencing gear. I wore the knickerbockers, tore the sleeves off the jacket to make a waistcoat, put my gym shoes on.

That was the start of my stage costume, captured on the iconic Rumours cover, and I've worn some version of that ever since.

In the early days of Fleetwood Mac we liked to push the naughtiness envelope. At one gig I came back from a toilet break with the lavatory chains, a ball attached at each end, wrapped around my waist.

I did a solo, hitting the balls into the microphone, just to make the lads laugh. Talk about spontaneous expression! The funny part is, my balls never went away.

I began wearing wooden balls in everyday life, attached to my belt - quite the conversation starter. To this day I never play without them.

I was only one of the pioneers for diversity. Sir Mick Jagger, David Bowie and countless others who wanted to be outrageous and self-expressed, pushed the envelope of what was considered "masculine". We opened minds by blowing minds.

I say hats off to the Lady Gagas of today's world, those who challenge society's expectations and encourage people who are different from the mainstream to stay that way. Bravo.

There are a lot of minds that still need opening and blowing and much work to be done.

Mick Fleetwood is a guest Columnist with the Sunday Express.  This is his third contribution, his first two articles appeared on February 16th and February 23rd - you can read his first two columns here.
Nickslive at Sunday, March 02, 2014
Share