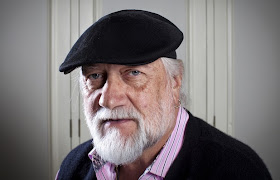 By Roy Trakin
The Hollywood Reporter


Mick Fleetwood has been signed to host a series of television specials, 24 Hours with Mick, featuring one-
on-one conversations and adventures with an array of his friends and colleagues.  The Fleetwood Mac drummer/founder will spend a day with each guest probing their thoughts, interests and ideas. Where and when it will air has not yet been announced.

The series will showcase an eclectic line -up of interview subjects from a diverse array of fields, including music and entertainment to technology and politics, art, architecture and more. Each subject will be hand-picked by Fleetwood as someone he admires and whom he is fascinated.

The show will be filmed in a variety of locations, including his home in Hawaii to cities around the world where he will be touring with Fleetwood Mac.

Continue to the full article at Billboard
Nickslive at Tuesday, April 08, 2014
Share