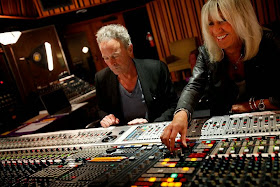 
Lindsey Buckingham revealed that Fleetwood Mac is currently in the studio recording its first studio album in over a decade -- with the full classic lineup teaming up for the first time since 1987. Buckingham explained that a substantial amount of the material came from the group's 2012 sessions for their Extended Play EP, released last year:

"There was a bunch of material that I cut with John (McVie) and Mick (Fleetwood), about a year-and-a-half ago, before we hit the road last time. And a couple of those made it into the show and we put out this little EP from that -- but there were quite a few other things. So, y’know, we had that as a starting point for an album."

"We were here at the Village for I think 4 weeks, then we took a week off, and then we were here for another 4 weeks. And this is our last few days.  And we got 8 tracks, very far along... You know like 75% done in that amount of time. And all of those except for 1 are Christine, or co-writes between Christine and myself. Because it seemed like the priority was to work on her stuff then to get her feeling comfortable and feeling far along with this process and we managed that very well".

Listen to the Audio of Lindsey explaining their time at The Village: