The 20 Best Fleetwood Mac Songs of All Time via @pastemagazine 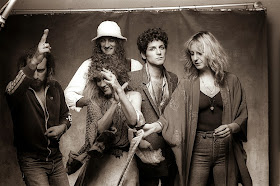 The 20 Best Fleetwood Mac Songs of All Time

Fleetwood Mac embodied the high gloss, tube-topped reality of the late ’70s like few others. Equal parts British blues rockers, folkie bohemians and thick South California soft-pop harmonies, they crafted a songbook rife with strife, long on eroticism and charged by the cocaine-fueled reality of the era. Post-disco, it was the illusion of earthy, mystical post-hippie magic, the return of electric guitars and rhythm sections that echoed.

Ironically, it was the merger of two Northern California dreamers—Lindsey Buckingham and Stevie Nicks—that provided the solid rhythm section of Britain’s ferocious Mick Fleetwood on drums, velvety vocalist/B-3/pianist Christine McVie and melody-driven bassist John McVie the catalyst for superstardom. Aggressive playing, pop-inflected melodies and sexual frisson ignited rock that was palatable in the malls as well as back rooms, yet some of pre-Buckingham/Nicks songs remain pivotal in the catalogue.

And what a catalogue! The self-titled “white album” lead to the 45-million selling Rumours—inescapable for a period of almost three years. They followed with the progressive, challenging two-record set Tusk, the more conventional Tango in the Night and Mirage. When Bill Clinton made his ran at the White House, it was “Don’t Stop” that fired up his team; for his Inauguration, the band reunited to play.

Here are the 20 best songs from Fleetwood Mac:  Click through to Paste Magazine, see if you agree.
Nickslive at Thursday, May 29, 2014
Share