I've never seen this before... What a little treasure! Thanks Richard for posting it! 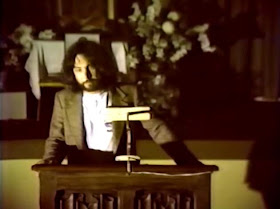 "Many moons ago I had posted on YouTube by an old and great friend of mine Kevin Moran, a video we shot while recording the album Tusk at the Village Recorder in 1980. During some down time while Ken was dealing with some broken equipment, Mick, Lindsey, Myself and with some help from Raymond Lindsey, (Lindsey's guitar tech at the time) decided to make a horror movie to stay creatively engaged. Up stairs from the studio was the Transcendental Meditation Center for the Maharishi Mahesh Yogi, (hope I got that right), which used to be an old theatre complete with seats and when empty was a bit creepy. Perfect setting for a horror movie, right? Well with Lindsey (Buckingham) as director, Mick as the monster and myself as a truly bad actor, (I really suck) we went at it without even a hint of a script. What you will bear witness to is called The Harmonica Killer. My sincere apologies if this attempt at humor offends any one in anyway. PC wasn't a top priority back in 80 but I think will get by. Anyway, why do you think they call it dope, right? So as long as it is still up there, if you have a few minutes to spare, just punch up The Harmonica Killer, Mick Fleetwood of Fleetwood Mac on YouTube and feel free to comment on just how bad a short movie (edited in camera, on the fly) this really is. Enjoy, with luv and laughter......r"

While cleaning out Dashut's storage unit one hot day in vegas, i found this dvd labeled "fleetwood mac -tusk 1980 - "The Harmonica Killer" in an old box with a bunch of cassettes in it. Turns out to be a "horror movie" they filmed while a tape machine was being fixed and they had the day to mess about.