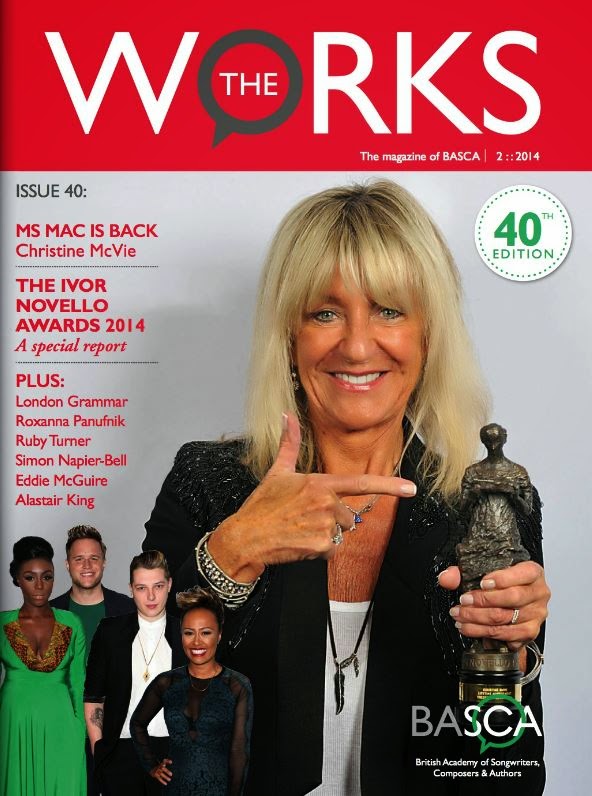 It's here... Christine McVie's interview with The Works, the magazine of BASCA - British Academy of Songwriters, Composers & Authors.

Check out the interview in The Works Magazine online at BASCA.org

Really great interview.  Christine talks about her Lifetime Achievement Award she received... About songwriting, collaborating with Lindsey Buckingham. The new Fleetwood Mac album, co-writing with Stevie Nicks and Fleetwood Mac's World Tour. Here's one nugget of info for the UK:

"According to Christine McVie (with a caveat to stand corrected if she's wrong) the band is booked to add a European leg to their world tour. This will coincide with the release of the new album.

I think we're doing four nights at The O2 around Spring time next year, you know April around that kind of date. If I'm wrong on that, then I'm gonna get hung drawn and quartered".

Thank you to Darren Haynes and BASCA for including Fleetwoodmacnews.com in your interview piece.

Here is the audio from the presentation of Christine's Lifetime Achievement Award at the Ivors. The link is part of the interview piece in The Works magazine... I missed it the first time around.
Nickslive at Tuesday, June 24, 2014
Share