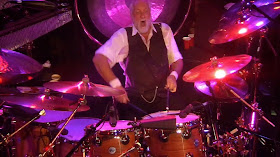 Suretone Entertainment powered by Cinsay announces today the results from the first online live music event hosted on SuretoneLive.com. Measured by viewership, social interaction and eCommerce, the event was a huge success. The online show, which was planned, only a few days in advance, with less then $400 in advertising and promotion for the virtual portion, yet drew thousand’s to the site’s page. Within a few hours, viewers from 30 different countries around the world were watching and sharing via the web and on mobile devices.

The online portion of the concert was set up just days in advance to showcase the evolved technologies of Cinsay’s Video Smart Store™ platform and to launch the next evolution of online music entertainment, seamlessly bundled with social sharing and eCommerce. Online viewers had the exclusive opportunity to not only see interviews with the performers and the live concert but to also purchase VIP packages for Fleetwood Mac’s upcoming fall tour, apparel from Mick’s restaurant and music venue, ‘Fleetwood’s’ on Front Street, and to win several one-of-a-kind items autographed by members of the bands. During the live feed, tens of thousands of dollars of merchandise and fan packages were sold. Post data showed an impressive 6.8% conversion rate of sales from video views to number of items purchased inside the video by individual fans.

“Just phenomenal: This event was history-making! We (the band) got back to our roots playing a small venue, which we love to, and had the ability to share that experience up-and-personal with thousands of fans all over the world,” said Mick Fleetwood of The Mick Fleetwood Blues Band. “The SuretoneLive and Cinsay solution is not only the best thing to happen to the music industry in years but it will be the biggest.”

Continue to the full press release

Check out this post for more pics and a review of the show
Nickslive at Monday, June 16, 2014
Share