Today (July 12th)... Dave posted this pic with this caption. Lucky guy is listening to a referece copy of the new album! 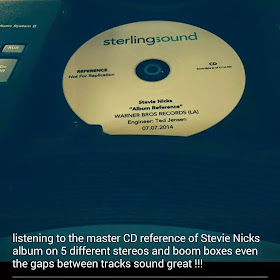 Great news!!! Looks like the work is done and the package complete! Looks like the ball is in the labels court now to schedule the release and get the word out. Exciting stuff!

July 16, 2014
Unconfirmed tracklisting appeared briefly on wikipedia July 16th (Removed today, July 17th) showing the following tracks on Stevie's upcoming album.  Personally, I think this is bogus, typically something as important as a tracklist and the actual album title (which still hasn't been published) should and will come via a Reprise Records press release accessing one of their many avenues to release such information rather than some sort of haphazard random post on a wikipedia page which can be altered simply by anyone.  But for historical purposes and to make note, this is the track list that was posted preceded with the words "Reprise Records confirmed". The list of songs has since been removed:

This tracklist was confirmed as fake.
Nickslive at Thursday, July 17, 2014
Share