Why is Everyone in SF Obsessed with Stevie Nicks?


Stevie Nicks turned 66 years old not long ago, and she’s everywhere. She sang a duet on Jimmy Fallon, with him as Tom Petty. She was on American Horror Story: Coven, having played herself – possibly because Ryan Murphy can’t resist writing his love of her straight into his characters’ minds. She even did a weather report. 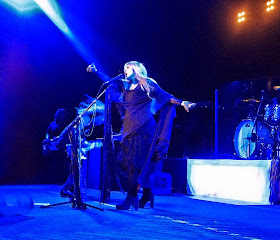 With her vampish hedonism and love of shawls and Victoriana, there is something delightfully absurd about Stevie Nicks’ persona that seems to resonate in San Francisco. She is approachably, unpretentiously weird. As a drag icon for years – although the Night of 1000 Stevies is a New York thing – she’s a recurring specter on the scene. We asked some creative current and former Bay Area residents their thoughts on this brilliant woman, the goth-witch draped in chiffon who sings white-bread songs with universal appeal.

And although they’re skipping San Francisco for Sacramento and San Jose, Fleetwood Mac will tour this fall, in their full lineup. Just in case you were wondering.