"A GREAT time at lunch with some members of the Fleetwood Mac and Stevie Nicks family."

Somethings cookin' over at the Nicks residence and it may be more than lunch... Dave Rahn, Production Co-ordinator and Catering Manager for Stevie's 2010-2011 tour and Fleetwood Mac's Catering Manager on the 2009 Unleashed Tour posted this photo yesterday with the caption:

"A GREAT time at lunch with some members of the Fleetwood Mac and Stevie Nicks family. Love this group of people!"

Not in the photo, but also there and had just left apparently was Waddy Wachtel.  The photo was taken yesterday (July 31st) and appears to have been taken at Stevie's home. 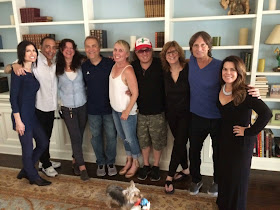 
A lot of familiar faces connected to Stevie either solo or with Fleetwood Mac. Sharon of course sings back on everything Stevie does whether solo or with Fleetwood Mac. Carlos has mainly been backing up Stevie on her solo ventures. Karen is Stevie's Assistant. Kellianne is one of Stevie's god daughters and if you saw the In Your Dreams Documentary, she was sprinkled all through the video. She did all the cooking at the big house during the recording of the album. Jimmy is Stevie's solo band drummer. Sheryl Louis is Stevie's Manager. Brett supports Stevie and Lindsey solo and has been part of the back up musicians on Fleetwood Mac's past 3 or 4 tours. Eilynn is Stevie's makup artist for everything Stevie does. Not shown, was Waddy Wachtel who of course is Stevie's Musical Director and co-Producer of her new album "24 Karat Gold - Songs From The Vault".

Of particular interest is the presence of Waddy Wachtel, Carlos Rios and Jimmy Paxson - which leads me to believe this was more of a Stevie (solo) meeting rather than something to do with Fleetwood Mac.  Just a guess of course.
Nickslive at Friday, August 01, 2014
Share