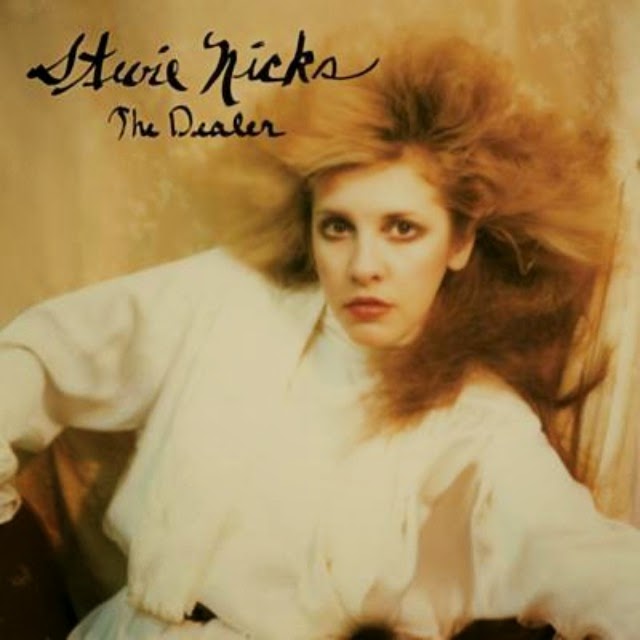 Stevie Nicks has handed out "The Dealer," the first track from her upcoming solo album, 24 Karat Gold — Songs From the Vault. The upcoming album stands as the Fleetwood Mac frontwoman's first LP since 2011's In Your Dreams.


The swinging, piano-driven cut comes complete with a lyric video and finds Nicks delivering an ode to misplaced love, owning mistakes and the catharsis that comes from reconciling the two. "I was the mistress of my fate, I was the card shark / If I'd've looked a little ahead, I would've run away," Nicks belts during chorus, her velveteen voice taking on a wizened-with-age quality that's perfectly belied by the line's winking conclusion: "If I'd really known you then / You'd've had to watch out."

Stevie Nicks Channels the 1970s in Her New Single, “The Dealer”
By Eliza Berman


I get a little nervous when an artist whose older work I favor comes out with a new album. But I take heart in the fact that most of the songs on Stevie Nicks’ forthcoming album, 24 Karat Gold: Songs From The Vault, were written between 1969 and 1987, with a couple penned in the mid-’90s. And with “The Dealer” she delivers a track that would have been at home on 1983’s Wild Heart or even Fleetwood Mac’s Rumours (1977).*

Musically speaking, “The Dealer” is something like a time capsule that Nicks could have planted decades ago—but the lyrics seem to come from a wiser woman taking stock and looking back: “It was my fault, my move, and my wine/ I see the sun now, and it still shines.” Her voice has a gravelly quality now that matches the sentiment.

Nicks has a busy fall lined up. In addition to promoting 24 Karat Gold, her first album since 2011’s In Your Dreams, she joins Fleetwood Mac for a reunion tour in September, and she has a gig as a mentor on The Voice. Don’t call it a comeback, though. As she told NPR, “You just can’t make a comeback. Comebacks are no good. You have to just keep singing. Or keep dancing.”

24 Karat Gold comes out on Oct. 7 and is available for pre-order now.

Stevie Nicks Releases 'The Dealer' From '24 Karat Gold: Songs From The Vault'
by Jessica Goodman


It's time to gather your shawls. Stevie Nicks released a new song, "The Dealer," from her upcoming album, "24 Karat Gold: Songs From The Vault." With lyrics like, "I was the mistress of my fate / I was a card shark / if I'd a looked a little ahead, I'd a run away," the song features classic Nicks themes of love and fate, fear and heartbreak.


America is a country constantly in flux, and American music is an ever-shifting behemoth, always looking for the next drop. But amid the change, there are certain things that remain timeless: liberty, love, a certain hustle, a sense of destiny, and, perhaps most of all, the golden voice and songwriting talents of Stevie Nicks, American hero.

Right now, it's Tuesday afternoon in 2014, but it might as well be a sun-glazed day in the late 70s, and we might as well be riding around in cars that take too much gas in a world that looks like a Valencia filter. Stevie Nicks just released a new song, "The Dealer," on which she quite literally escapes time. It's off her new album, 24 Karat Gold: Songs From The Vault, which is out October 9 and of which Stevie Nicks, via her website, says: "Each song is a love story... They represent my life, the secrets, the broken hearts. These songs are the memories - the 24 karat gold rings in the blue box. These songs are for you."

Naturally, the song, like the polaroid in its accompanying lyric video, comes across like so many unearthed memories, and your tears might come spilling out like so many decades of pent-up sadness. "I was the mistress of my fate," Stevie croons sadly, knowingly, in the way that only Stevie Nicks can croon about heartbreak: "If I'd a looked a little ahead/I'd a run away." "I'll be the passion/You be the play," she adds later, poetically. "I'll just almost hold you/You'll just almost stay here." Yeah, it's beautiful. Yeah, we might as well be standing in front of a corner store that looks like a movie set listening to this float toward us as it plays out of our car's AM radio. Yeah, we love Stevie Nicks.


The Fleetwood Mac singer and general all-around classic-rock hall-of-famer Stevie Nicks will soon release 24 Karat Gold: Songs From The Vault, a new collection of unreleased tracks, most of them written between 1969 and 1987. One of the album’s new songs is “The Dealer,” a sparkling piece of California studio-rock magic that seems like it could’ve come out at any point in the last 40 years. Check out a lyric video for the track below.

Our very first look at the new album comes courtesy of “The Dealer”. A charming and dusty little rocker, the song finds Nicks in true form, as though Rumours came out just yesterday.


Stevie Nicks is getting ready to release a new album of unreleased songs collected over the last few decades, called “24 Karat Gold: Songs From The Vault.” And while it might be obnoxious for anyone else to label their own stuff “24 Karat Gold” that was deemed not good enough for inclusion on any of her records, Stevie Nicks actually means it. She’s probably forgotten more A+ songs than most artists ever write in their lifetimes. Like this new single “The Dealer,” for instance—it wouldn’t have been out of place on any of your favorite Fleetwood Mac records.

Stevie Nicks' new single isn't so hot: Was it better off a bootleg?


Legendary songbird Stevie Nicks released her new single, "The Dealer," today. The track is the lead single off her upcoming album, 24 Karat Gold, and with it comes a lyric video complete with a soft-focus old photo of the singer. The song was previously recorded in 1979, while Fleetwood Mac was working on their album, Tusk. "The Dealer" didn't make the cut for that album, but a leaked demo has occasionally popped up among fans. We'd love to say Stevie Nicks can do no wrong in our eyes, but in the case of "The Dealer," we think some things might have been better left in the '70s.

Nicks was about 34 when the song was originally recorded and it seems as if she still had a bit of maturing to do with her songwriting. The concept is simple enough: Nicks is coming to terms with past transgressions and unrequited love. Heavy stuff, sure. However, the lyricism is a little immature. We can appreciate that it was written when she was considerably younger, but by mid-30 and well into her career, we expect more. With lines like, "But, you'll just almost stay here, I'll just almost hold you," the lyrics, at some points, seem more like Nicks was grasping for syllables more than good song content.

Furthermore, there's not much musical growth. In a way, it makes sense that Nicks' music would still sound so strikingly similar to everything she's released in the past. Again, this song was written long ago, as are all the other songs on the album. However, she could have used this chance to reboot them with slightly more modern music. Instead, the song still sounds exactly like it came from 1979 — you know, when it was a demo that didn't make the cut for Tusk. This, of course, will appeal to the vast majority of her longtime fans. However, it leaves us underwhelmed.

Is it the worst song ever? No. In every other way, Nicks will continue to be our golden goddess of the music world. Hopefully, the rest of 24 Karat Gold will shine light on brighter, actual gems that have long been forgotten. Just don't expect us to spend any more time with "The Dealer."