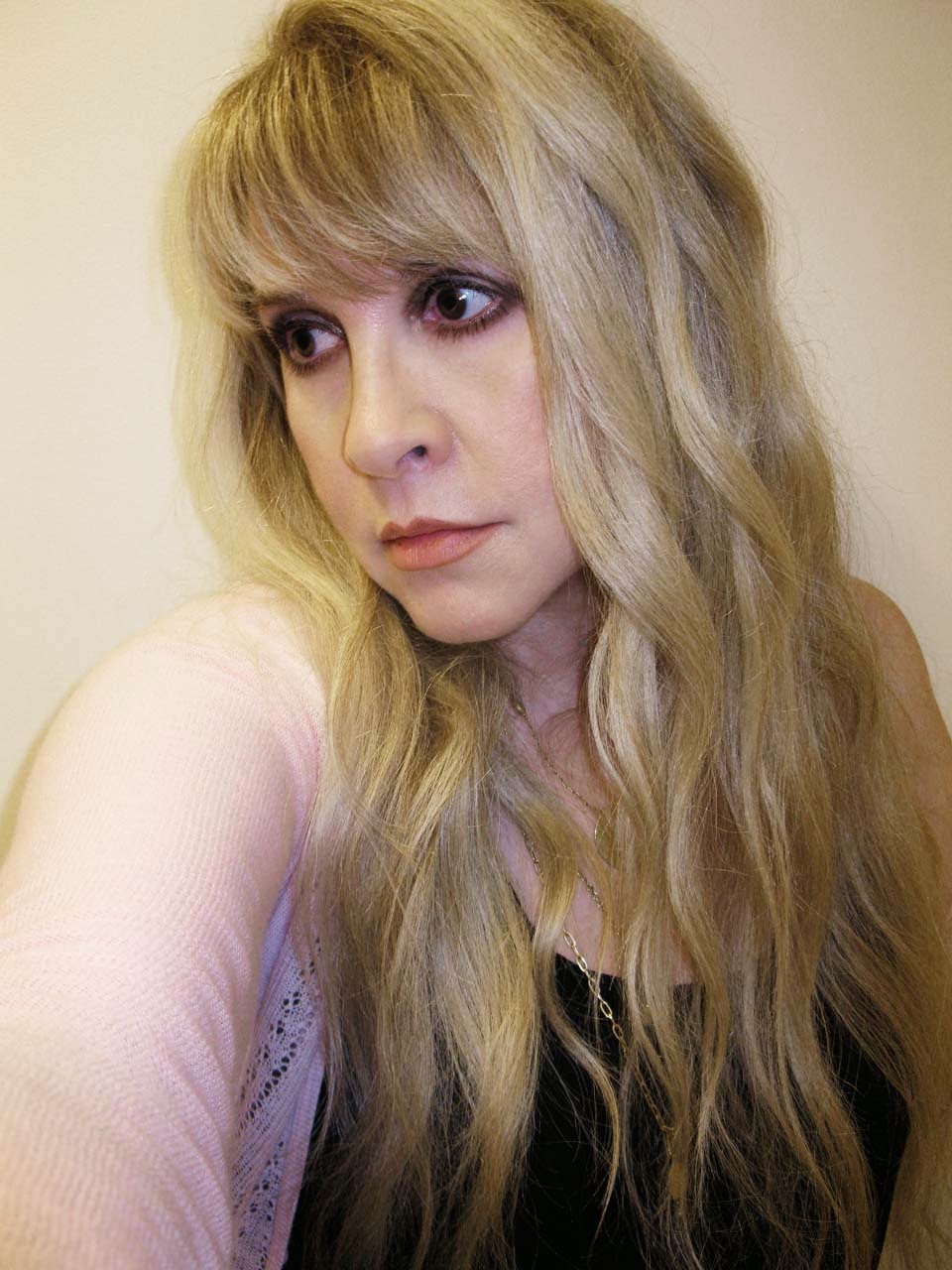 
"The Photography of Stevie Nicks : The 24 Karat Gold Collection" debuts at Morrison Hotel Gallery, 201 Mulberry Street, NYC, on October 10 and 11, and will move to the Morrison Hotel Gallery Loft at 116 Prince Street for the month of October, 2014. For a special online-only sneak peek of V Magazines upcoming issue, the rock icon supplied them with some extra selfies and some words of self-reflection.

Watch out for more from the issue and from Nicks, coming soon

Within the glittery pantheon of rock-and-roll royalty, there is no higher queen than Stevie Nicks. Her influence as a songwriter, singer, and style icon is practically unparalleled. Both in Fleetwood Mac and as a solo artist, she’s had a hand in writing some of the most indelible songs of the 20th century. Her own personal style—an aesthetic marked by scarves, ribbons, tambourines, and witchy platform boots—has spawned decades of aspiring, Stevie-worshipping sisters of the moon. Her life is both an inspiration and a cautionary tale, and is one of the most dramatic and chronicled in all of music history. Having endured heartbreak, drug addiction, and the ruthlessly mercurial tastes of the music industry, Nicks has not simply survived, she has thrived. While so many of her peers have perished, retired, or simply been relegated to the dustbin of nostalgia, Stevie Nicks—the eternally wild heart—continues to forge ahead.

Over 40 years into her career, the 66-year-old Nicks is busier than ever. In 2011 she released In Your Dreams, her first new studio album in ten years, and then followed it up with an accompanying documentary and nearly two years of solid touring. And this fall she premieres 24 Karat Gold—Songs from the Vault, a newly recorded collection of previously unreleased songs that span the entirety of her career. Around the same time, Nicks will once again rejoin her old bandmates in Fleetwood Mac—including a newly unretired Christine McVie (“I can’t even tell you how much fun she is and how nice she is and how funny she is—she just lightens up everything”) for yet another massive world tour. Even though she remains steadfastly committed to forward momentum, mining her catalog has proven fruitful for Nicks, providing some fascinating perspective on her tumultuous career.

Her own tempestuous personal life is now the stuff of legend—“I always remember, about three weeks after going to rehab, walking across that Palm Springs desert in the grass of Betty Ford, after actually meeting Betty Ford, and thinking, If the First Lady can do it, I can do it”—and much of it is reflected in these songs. Tracks like “Lady,” from 1971, blueprint her signature style: a keen sense of melody and the kind of emotional immediacy that make her work feel like personal property to audiences across the globe. According to Nicks, one of the pleasures of at long last properly recording the songs is that doing so reactivated so many good memories.

“‘Lady’ was probably the first song I ever wrote on piano,” she recalls. “I think ‘Rhiannon’ is probably the third or fourth song I wrote. At the time, Lindsey and I had moved into a house with our friend Keith, and I remember going, How am I going to live in this little, tiny house with these two guys and try to do music? I remember listening to Keith’s big, fantastic stereo and vacuuming to Chaka Kahn’s ‘Sweet Thing.’ You know, just vacuuming like a madwoman and singing along to Chaka. I remember it like it was yesterday.”

Though Nicks continues to write music, she also embraces her role as mentor, dishing advice on The Voice, popping up (as herself) on American Horror Story, and most recently striking up a friendship with Rookie’s teen phenom (and avowed superfan) Tavi Gevinson. “Tavi is like my newest, youngest child,” she gushes. “I brought her golden Chanel platform boots from Paris. She’s going to be a huge force in this world.”  And on her role as rock and roll’s reigning elder stateswoman?

“You know what? It feels like a great honor,” she says. “To be able to do what I love and help people is great. I’ve talked about this a million times, but it’s good to throw out a few little nuggets of wisdom. You know, a few little things that I’ve done that I would not do if I had it to do over. Also, just to put a few little things in my songs that might just open your eyes a little bit about where you are going. I feel good that I can do that.”

24 Karat Gold—Songs From the Vault is out now from Warner Bros. 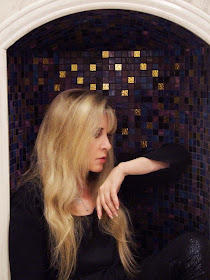 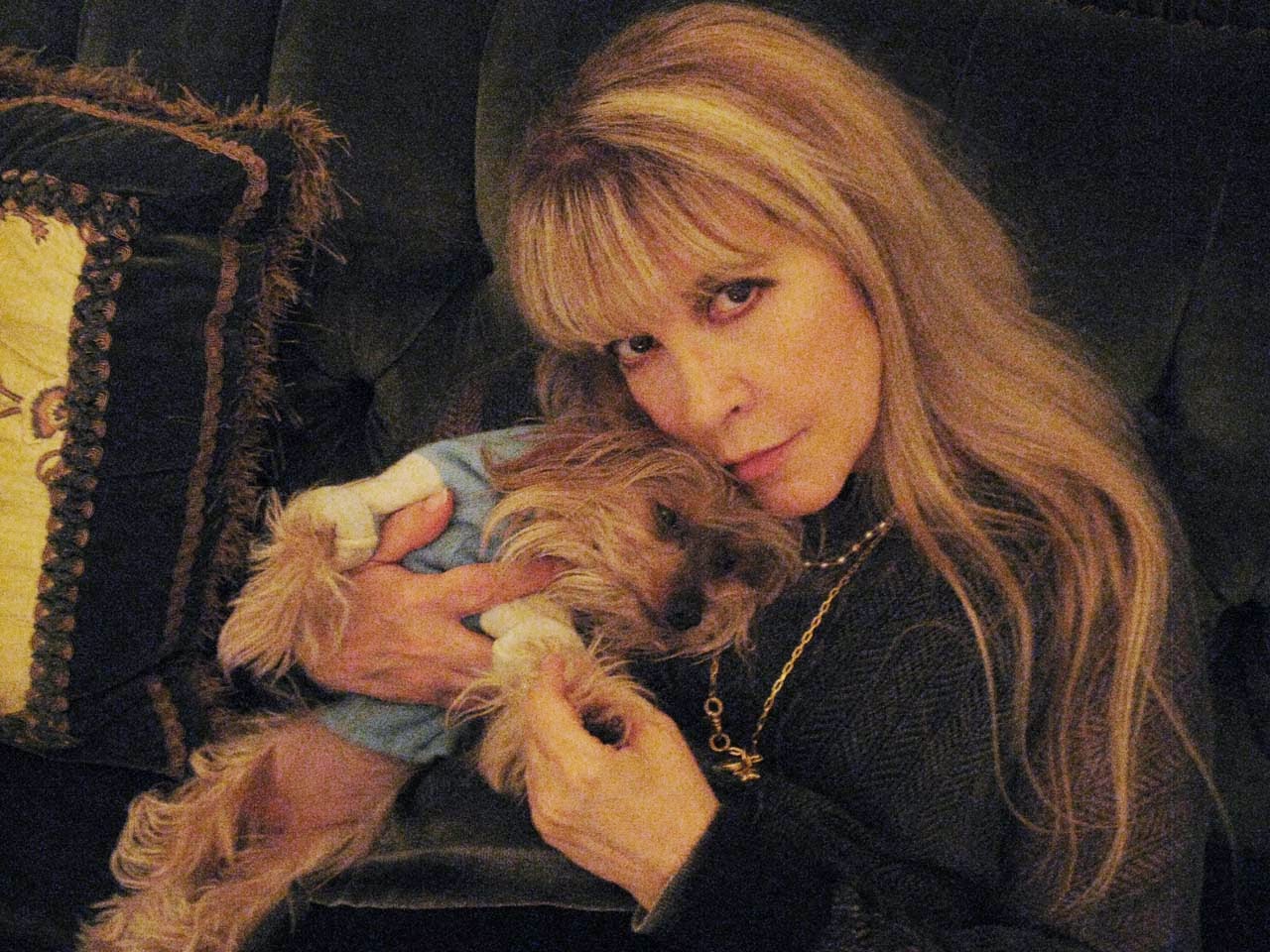 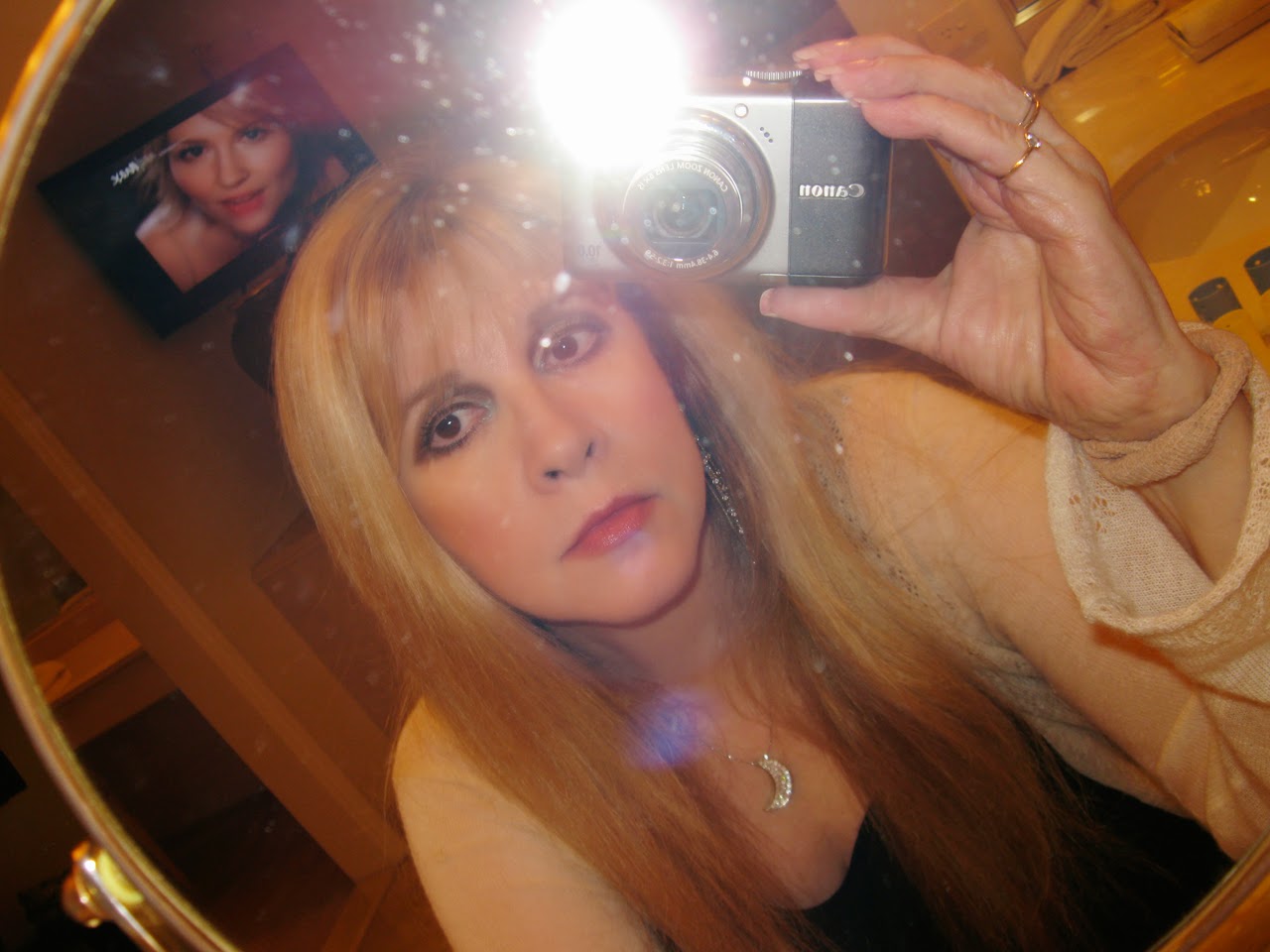 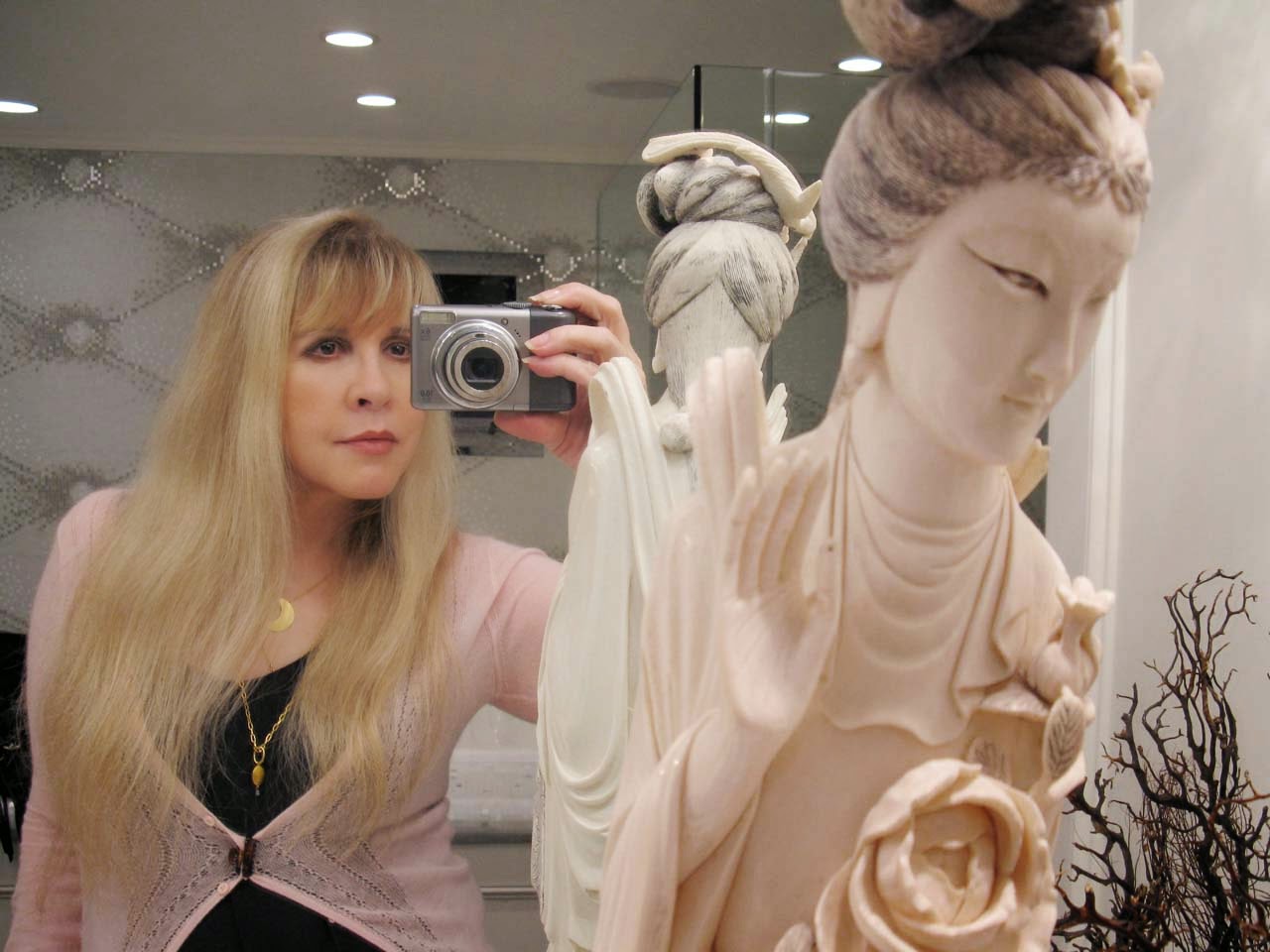 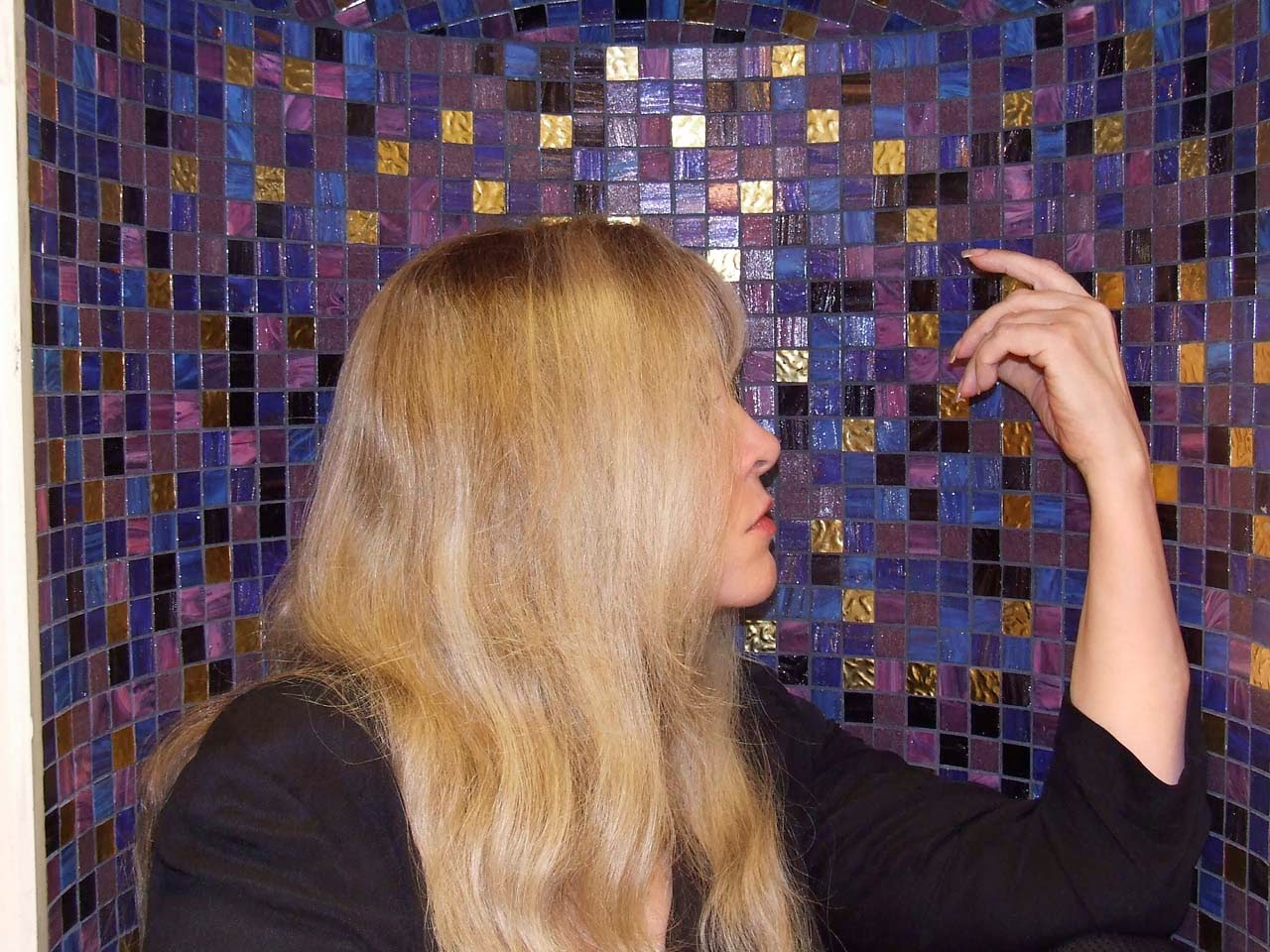 
Not only was Stevie Nicks light years ahead of her time promoting the whole ethereal gypsy witch aesthetic (you're welcome, American Horror Story: Coven), but she was doing selfies before they were cool. (To be fair, though, Ringo Starr has her beat.)

That habit is the source of inspiration for the new photographic exhibit "24 Karat Gold," at New York's Morrison Hotel Gallery. (Prints are also available through the gallery's website and its Los Angeles location at the Sunset Marquis Hotel.)

In Nicks's own words: "I wanted to learn how to become a photographer and since I don't sleep at night, I started thinking, who am I going to ask to stay up all night and then do a show the next night?"

"I had a long cord that plugged into the Polaroid, and I put it on a tripod. I would sit with the button in my hand so that I could be completely dressed in a long white gown with red lipstick and big hair … I usually had to take about 12 shots until I got it just right. Lots of times I'd run out of film and I would send people out to buy me film in the middle of the night. I was doing this forever and I didn't stop until Polaroids were almost impossible to use because they all eventually broke down and we couldn't find film anywhere."

Nicks, who adds that she "didn't even get a digital camera until 2002," says she doesn't consider the series "selfies" (sorry, Stevie). She says she uncovered the shots while looking back on songs from years ago for her new album.

Eurythmics guitarist Dave Stewart (who produced Nicks's new album) curated the exhibit. "When Stevie was showing me some Polaroids she had in a shoe box about a year ago I couldn't help but notice the amount of care and attention to detail she had taken in taking these photos … [The exhibition] is an intimate look – a frozen moment in time through the eyes of the artist herself – during a period when she was as successful as any rock star could ever be and at the same time as vulnerable and lonely as every artist can be when it's 4 a.m."

Nicks's new album, 24 Karat Gold, was released Oct. 7. Fleetwood Mac is currently on a tour that reunites them with departed vocalist Christine McVie for the first time in years.

Stevie Nicks and the rest of Fleetwood Mac were in New York City this past week to perform at Madison Square Garden and to appear on TV, but  Thursday night, three-fifths of the band was also on hand to host the opening night reception of a photographic exhibit of Polaroids that Stevie took of herself from 1975 to 1987.  Call them "selfies" if you like, though Stevie herself doesn't.

"I don’t consider this series of Polaroids 'selfies,' which are usually you and somebody who’s standing behind you," she said in a statement about the exhibit, which is called 24 Karat Gold, just like her new album. "My portraits could be full body and lots of props.  You could be on a chaise lounge with shawls and feathers and a cat or dog. They were well thought out."

The exhibit in downtown Manhattan was curated by Eurythmics guitarist Dave Stewart, who produced Stevie's last solo record, In Your Dreams.  He told ABC News Radio Thursday night that he sorted through shoeboxes full of Stevie's Polaroids to find the ones he felt were the most "atmospheric."

The gallery was filled to capacity with fans and well-wishers, all who came to admire the huge blow-ups of the photos, which feature Stevie adopting a variety of personas and moods.  Everyone at the gallery, of course, also hoped to catch a glimpse of Stevie, and they certainly did.

At one point during the evening, Nicks swept out of a private back room, surrounded by a small group of people, and began to slowly walk around the gallery, stopping by each photo.  Her progress was slow, though, because she was surrounded on all sides by excited fans frantically trying to take pictures of her.  This led to a comical situation where Stevie was looking at photos of herself that she took, while dozens of people tried to take pictures of her looking at the photos. Mick Fleetwood soon joined her on her walk around the gallery.  While Christine McVie was also there, she mostly stayed out of sight.

The 24 Karat Gold exhibit officially opens Friday at a Manhattan art space called 201 Mulberry Street.  Two days later, the show will move about a half-mile across town to the Morrison Hotel Gallery, which specializes in music photography, where it'll be on display for the rest of October.  Prints are also available for purchase through the gallery's website. 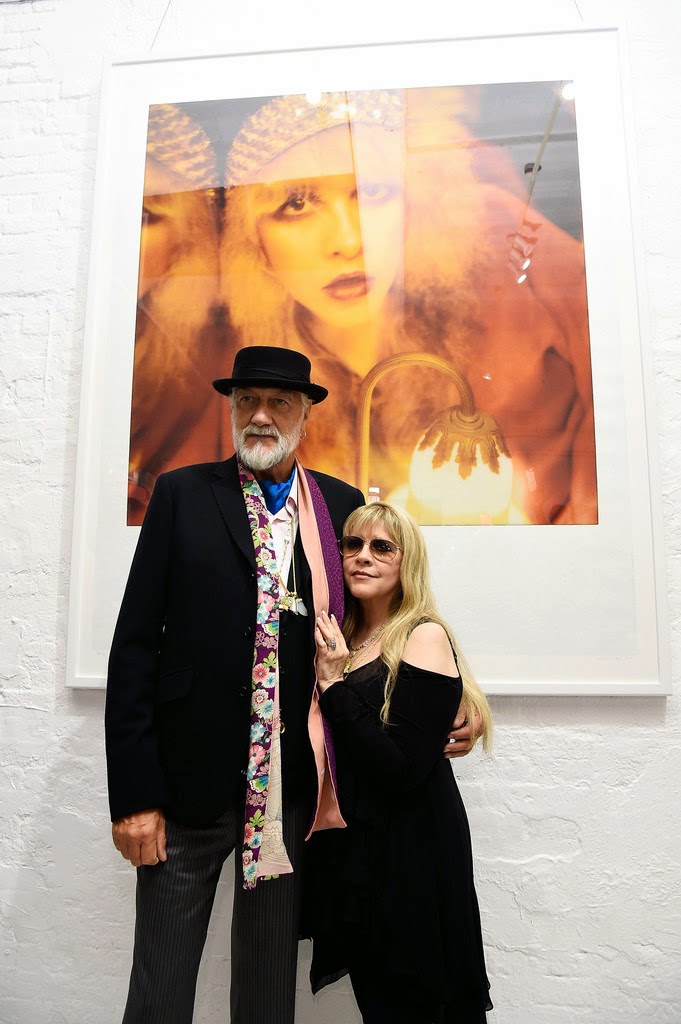 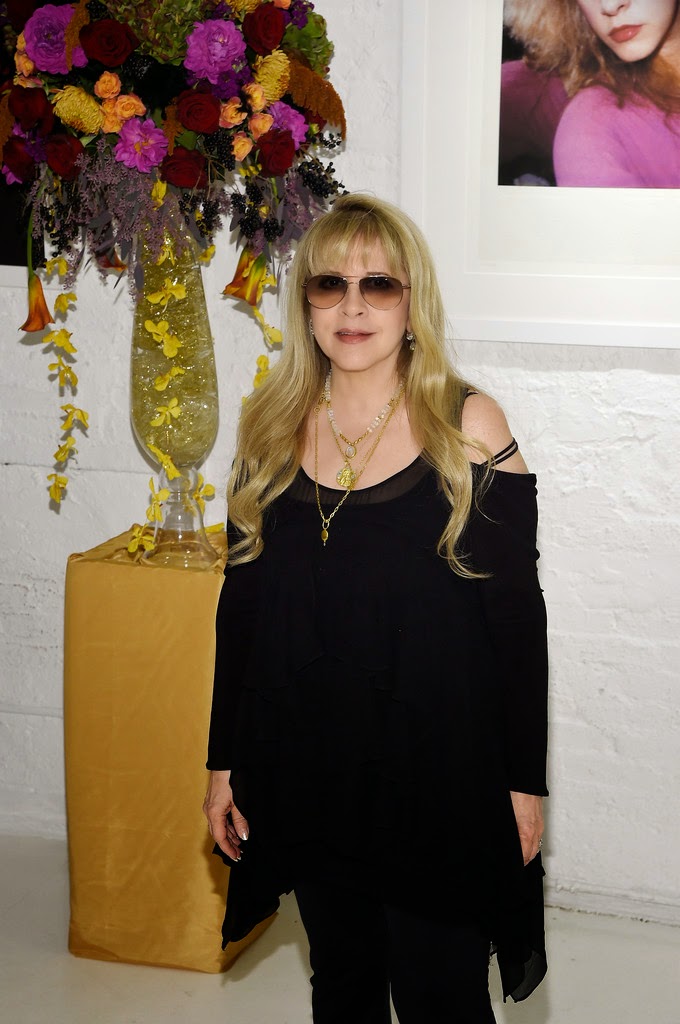 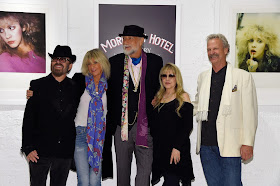 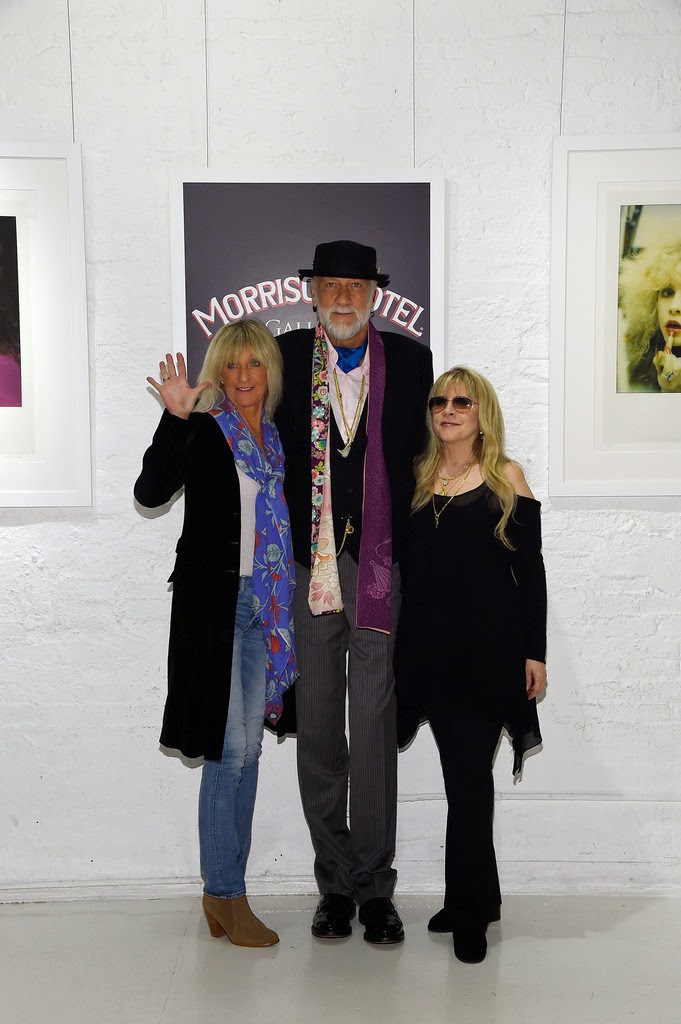 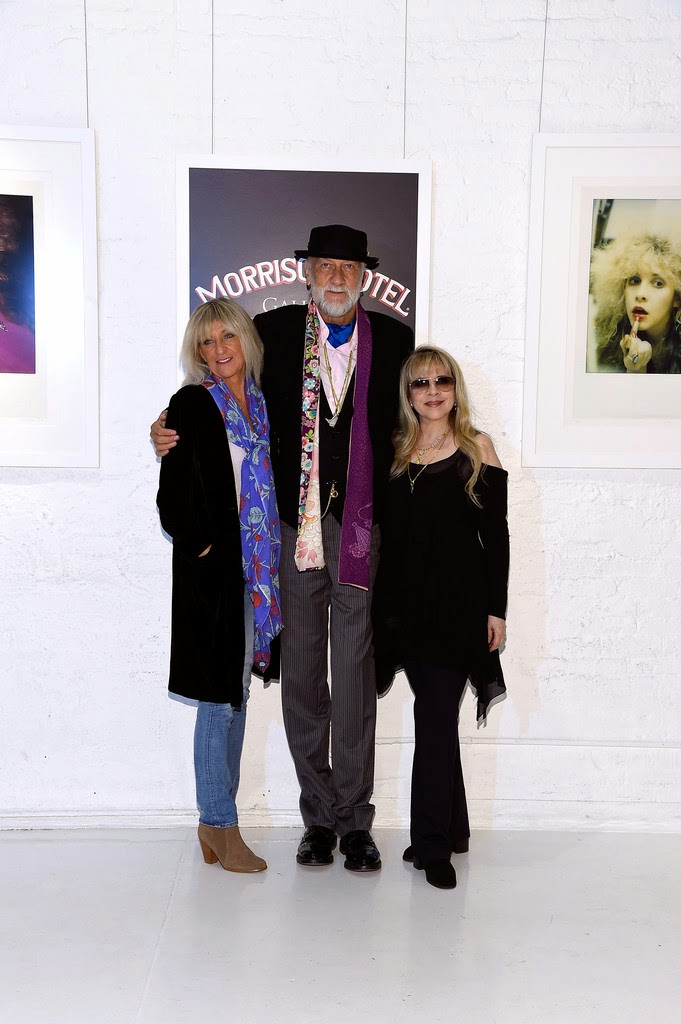