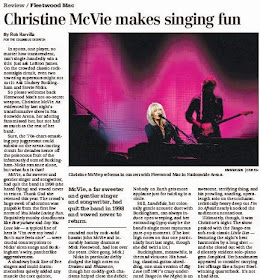 
In sports, one player, no matter how transcendent, can’t single-handedly win a title: Just ask LeBron James. On the crowded classic-rock-nostalgia circuit, even two towering superstars might not cut it: Ask Lindsey Buckingham and Stevie Nicks.

So please welcome back Fleetwood Mac’s not-so-secret weapon, Christine McVie. As evidenced by last night’s transformative show in Nationwide Arena, her adoring fans missed her, but not half as much as the rest of her band.

Sure, the ’70s-chart-smashing pop juggernaut could subsist on the arena-touring circuit for decades hence off the poisonous fruit of the infamously doomed Buckingham-Nicks romance alone, but what fun is that?

McVie, a far sweeter and gentler singer and songwriter, had quit the band in 1998 (she hated flying) and vowed never to return. Thank God she relented this year. The crowd’s huge swell of adoration was palpable from the first few notes of You Make Loving Fun. Exquisitely mushy cloudbursts like Everywhere and Say You Love Me — a typical line of hers is “I'm over my head / But it sure feels nice” — were crucial counterpoints to Nicks’ siren songs and Buckingham’s wiry, pantherlike aggressiveness.


A shadowy back line of five singers and multi-instrumentalists quietly added any muscle the core quintet, rounded out by rock-solid bassist John McVie and incurably hammy drummer Mick Fleetwood, had lost over the years. (Nice gong, Mick.)

Nicks in particular deftly dodged the high notes on Dreams and Rhiannon, though her cuddly-goth charisma helped close the deficit: Nobody on Earth gets more applause just for twirling in a circle.

Still, Landslide, her colossally gentle acoustic duet with Buckingham, can always induce open weeping, and her entrancing Gypsy may be the band’s single most rapturous pure-pop moment. (The lost high notes on that one particularly hurt last night, though she did twirl a lot.)


Buckingham, meanwhile, is the mad virtuoso: His howling, classical-guitar-shredding, one-man version of Big Love (off 1987’s crazy-underrated Tango in the Night) is an awesome, terrifying thing, and his prowling, snarling, opera-length solo on the uncharacteristically heavy deep cut I’m So Afraid nearly knocked the audience unconscious.

Ultimately, though, it was Christine’s night: The show peaked with the Tango-era soft-rock classic Little Lies — featuring the night’s best harmonies by a long shot — and she closed out with the delicately strident solo-piano gem Songbird. Her bandmates appeared to consider carrying her offstage like a Super Bowl-winning quarterback. It’s not a bad idea.

SAY YOU LOVE ME