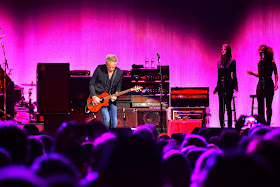 “Why don’t they just retire?” It’s a question often posed by cynics about legendary rock bands of the ’60s and ’70s who continue to tour, and are able to charge hundreds of dollars per ticket. Obviously, that cynical question doesn’t take into account the system of capitalism and the rules of supply and demand: if people want to pay for something, the market isn’t wrong to provide it for them. If people want to see a rock band — enough people, say, to fill three arena shows in the New York area in less than a week — why should a band call it quits?

Of course, music fans see music as more than just business, it’s art. And most fans have probably experienced at least a few band’s concerts, concerts that take place long after the magic is gone, the performances perfunctory. Many genre-specific bands — heavy metal groups, goth bands, punk rockers — may have a hard time convincingly performing angst-ridden anthems that they in their 20s, many decades and royalty checks ago.

Fleetwood Mac is not one of those bands.

While their most celebrated songs are about relationships that went south in the ’70s, somehow those songs seem timeless, more than thirty years on. And, as every fan in the audience knows, those songs are generally about people who are on stage with the person singing them. Such is the magic and the drama of Fleetwood Mac.

On Saturday night (October 11) Fleetwood Mac played to a packed Prudential Center in Newark, N.J. (they played two nights at Madison Square Garden earlier in the week); this was only about a year after the band did a two night stand at the Garden last year. The big difference — and the reason for going on tour so quickly after the last one ended —  was the return of singer/songwriter/keyboardist Christine McVie.

Ms. McVie, who retired from the band after their incredibly successful 1997/1998 reunion, not only left Fleetwood Mac, but the music business and America. As guitarist/singer/songwriter Lindsey Buckingham told Radio.com in late 2012, “She ended up getting a divorce, she ended up selling her house in L.A., she moved back to England, she quit the band, she sold her publishing.” He added, “I would be shocked if she ever expressed any interest to do anything with us. Shocked and pleased.”

Buckingham looked more than pleased Saturday night, as did the rest of the band: singer/songwriter Stevie Nicks, drummer Mick Fleetwood and bassist (and Christine’s ex-husband) John McVie. While Nicks and Buckingham have been the personalities that Americans historically gravitated to more than Ms. McVie, it was she who got the biggest reactions on Saturday night, from the audience and from her bandmates.

The band opened up, fittingly, with their anthem, “The Chain” (the only song credited to all five members as co-writers), followed by McVie’s “You Make Loving Fun,” one of the band’s biggest hits, and one that had been absent in their set lists since McVie’s retirement. The fans greeted it ecstatically.

Throughout the evening, each of the three singer/songwriters took turns at the mic, with everyone getting equal time. It’s amazing to watch a band with three bona fide hit making stars. And each of those stars, it should be noted, are great support players on the songs that they didn’t write/sing. And here’s a few other points worth noting:

Lindsey Buckingham is one of the most underrated guitarists in rock and pop music. His playing can be as wild and explosive as Neil Young’s or as subtle as Mark Knopfler’s. He’s a producer’s guitarist: he always plays what’s right for the song.

Christine McVie’s keyboards and vocals are lovely, sublime and essential. Fleetwood Mac’s live, Christine-less album Live in Boston, is legit, but is missing something. It’s not just her songs (although a Fleetwood Mac set without “You Make Loving Fun,” “Say You Love Me” and “Little Lies” seems somewhat incomplete), it’s her singing and her playing on Lindsey and Stevie’s songs. And of course, now that she’s back, Fleetwood Mac concerts can end the way they are supposed to: with her signature classic, “Songbird.”

For a star of her caliber, Stevie Nicks is very un-diva-like. It was she who most loudly called out for Christine McVie to rejoin the band over the past decade, and she sang backing vocals (and shook her fabulously ribboned tambourine) on McVie and Buckingham’s songs as though they were as important as her own. Despite her superstardom as a solo artist, she remains the ultimate band member (and, unlike on many previous Fleetwood Mac tours, she didn’t perform any of her solo hits with the band). Nicks is also mostly responsible for bringing in new fans, decade after decade. In the ’90s, Courtney Love and Billy Corgan endorsed her (the latter through his cover of “Landslide”) bringing in the alternative rock crowd. In the ’00s, it was Sheryl Crow (whom she collaborated with often) and the Dixie Chicks (who also covered “Landslide”). On Saturday night, after performing “Seven Wonders,” she dedicated it to American Horror Story, which she guested on last season. The mere mention of the show’s name was akin to saying, “How many twenty-something girls are in the house?” As it turns out: there were a lot, including many dressed like Ms. Nicks circa 1977, sitting right next to me.

Does any drummer other than Mick Fleetwood strap on a microphone before starting a drum solo? Probably not: but during his solo, he’s putting his considerable drums skills on display, as well his charming personality. Does a Fleetwood Mac show even need a drum solo? Perhaps not. However, as the guy who co-founded the band with John McVie and guitarist/singer Peter Green nearly fifty years ago, and the guy who has kept it going through countless membership changes, he deserves his moment in the spotlight. More importantly, he’s half of one of the tightest rhythm sections in rock and pop music. Which leads us to…

John McVie. The Who’s late bassist John Entwistle wrote and sang a song called “The Quiet One,” but that title more accurately depicts Fleetwood Mac’s bass man. Never stepping to a mic to speak to the audience, dutifully playing in the background, keeping in the shadows, only getting the spotlight during his iconic bass run in “The Chain,” he’s easy to miss. But he’s also irreplaceable. The warm pulse of his playing is present in every single song; take it away, and it would be like seeing a film without a score. It just wouldn’t sound right.

Throughout the 24-song set — all drawn from the classic lineup’s five albums recorded between 1975 (Fleetwood Mac) and 1987 (Tango in the Night) — the energy never waned, either on stage or in the audience.

At the start of the concert, when Buckingham, Nicks and McVie sang “You will never break the chain” together, it was with a bit more wisdom than perhaps they did in 1977; each of them has quit the band at least once in the years since. For those in the audience who may have experienced that song, and many of the others that the band played, as a Top 40 hit in the ’70s and ’80s, they may hear the Fleetwood Mac catalog differently now than they did when the albums were new. Surely most of all of the audience have had relationship changes and life changes in the decades since, but these songs somehow keep their relevance, while taking on new meanings. That — and the fact that the songs are just so good — is why a Fleetwood Mac concert still makes sense in 2014.

And the band aim to continue telling their story: Buckingham announced from the stage that “We have begun a profound and beautiful new chapter and it is a chapter that will go on for a long time and bear much fruit.”  Will their new songs make even a fraction of the impact that their older ones did? Time will tell. But after the last notes of “Songbird” faded, fans left the arena, happy, and perhaps with some anticipation about what this extraordinary collective will do next. At any rate, there will be many more Mac shows: the band just announced another leg of their tour for 2015.