Before the stage lights were even on, Christine McVie was already blowing kisses to a crowd that had spotted her in the darkness. They were big kisses, the kind meant to make up for lost time.

It had been 16 years since McVie had joined her bandmates in Fleetwood Mac on tour, and her return was cause for celebration. Yes, it meant more of her songs in the set list, but it also crystallized the fact that Fleetwood Mac has always been a group greater than the sum of its parts.

“On With the Show,” as this reunion tour is called, came to a sold-out TD Garden Friday night. (It rolls back into town on Oct. 25, with limited tickets available.) They played for 2½ hours, and the fact that there weren’t many deep cuts was a testament to just how hit-heavy their catalog is.

It was McVie’s night, even with such blinding star wattage emanating from Stevie Nicks and Lindsey Buckingham. After the opening “The Chain,” McVie greeted fans first, with a spotlight briefly fixed on her. Next up was Nicks.

“I’d like to say one thing: Welcome back, Chris!” Nicks roared.

It was fascinating to witness the differences among the three principal songwriters, who anchored the front of the stage, with bassist John McVie and drummer Mick Fleetwood, the band’s backbone, just behind them. (And then, even further back, were two auxiliary members on keyboards and guitar, respectively, and three backup singers.)

On “Gypsy,” “Rhiannon,” and “Sisters of the Moon,” Nicks brought black magic and force, hitting her notes hard and letting her voice swell and glide. Her vocals on “Silver Springs” were remarkably untouched by time, and she got into character for “Gold Dust Woman,” complete with a glittery gold shawl and some mystical dancing.

McVie, meanwhile, had a more elastic approach to her singing, imbuing “Over My Head” and “You Make Loving Fun” with sly understatement. She dedicated “Everywhere” to her bandmates, a poignant sentiment given the chorus: “I want to be with you everywhere.” Nicks tapped her tambourine against McVie’s maracas; it was the Fleetwood Mac equivalent of a fist bump.

Buckingham was in fine form, too, the guitar god who has no shame in letting you experience his prowess up close and personal. (He even leaned in to the audience during “Go Your Own Way” to let fans paw at his guitar.) His intensity raged on “Big Love” and “I’m So Afraid,” the latter of which spiraled into a bluesy fever dream. No wonder he was out of breath by the end of it.

At piano, McVie played “Songbird” soft and sweet, with Buckingham reeling in the guitar pyrotechnics. His pronouncement from earlier in the evening, that Fleetwood Mac had begun a “profound new chapter,” rang true.

Bidding farewell, McVie took two bouquets from the crowd, and all five members of the Mac linked arms. They hadn't always been one big happy family, but they were a family nonetheless. 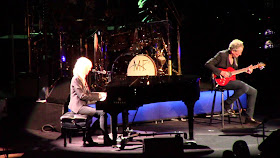 BOSTON – Friday night's rock show at TD Garden began with the big thumping beat of Mick Fleetwood as he, bassist John McVie and their three band-mates slid into the dark, chant-like groove of “The Chain.”

Lindsey Buckingham, Stevie Nicks and Christine McVie harmonized at the song's close, “I can hear you saying you would never break the chain … Chain keep us together, running in the shadows.”

Nothing could have set the stage better for Fleetwood Mac's sold-out 2 1/2 hour concert. (They return Oct. 25; limited tickets are available.

The chain that bound the members of Fleetwood Mac together had been broken for 16 years. We're talking the soft-rocking, but progressive, Californian/English hit-making band of the mid-to-late 1970s, not the British blues-rock band of the same name Fleetwood and John McVie formed during the late '60s. In other words, Friday night was Classic Mac for most people.

Singer-songwriter-keyboardist Christine McVie flew the coop in 1998, and although the band soldiered on sporadically, it was unbalanced. She was a fifth of the ensemble (make no mistake, Fleetwood Mac is very much that) and a third of the singing-songwriting team. She was missed.

How happy was the Mac to have her back? There was plenty of on-stage gushing, but Fleetwood put it most simply during the band introductions at night's end: “Our songbird has returned!”

McVie was modest, saluting her “favorite musicians, friends and family” and giving thanks “for letting me come back to join you.” She also got the final song of the night, yes, the sad and graceful “Songbird,” where she played stately grand piano alongside Buckingham's acoustic guitar.

A bit of context: There were those of us so inundated on AM and FM radio with Fleetwood Mac hits circa 1975-1978 (songs from “Fleetwood Mac” and “Rumours” albums) we practically cried uncle. But time passes – more than three decades! - and Friday's set revealed the genius combination that they both were and remain.

Buckingham even hinted there was new music to come. Before playing the spikey, “I Know I'm Not Wrong,” he said, “with the return of Christine we are beginning a beautiful, new, profound chapter that will go on a long time and bear much fruit.”

(Fleetwood Mac released a four-song EP, ”Extended Play,” in 2013 that went mostly by the boards and they played nothing from it Friday.)

The discord – romantic and musical – that once tore the band apart is now long ago and far away. The songs Buckingham and Nicks once sang about their own turmoil – most notably “Go Your Own Way” – had a less insular, more universal, kick. That ripsnorter, the final song of the regular set and one of the best kiss-off songs ever, brought chills. It was marvelous to hear them all together, these very distinct individuals meshing for a melodic group sound that ranged from gentle (mainly McVie's tunes) to mystical (mainly Nicks') to bracing (mainly Buckingham's) with lots of overlap.

Nicks is arguably the “star” of the group, that witchy woman in black, swishing her scarves, singing in a husky, slightly nasal contralto, twirling about to “Rhiannon” and an extended “Gold Dust Woman.” But if she provides the ethereal, it's Buckingham who provides the bite, the sizzling, incisive leads and the most charismatic rock 'n' roll stage presence.

Two of his acoustic-centered songs, “Never Going Back Again” and “Big Love,” were both sweet and defiant. More than a few times he skipped fiercely across the stage while playing and ripped off a ferocious coda to “I'm So Afraid,” finally banging on the fret board and strings with both hands.

When Nicks sang “Yes, I'm getting older too” in “Landslide,” she smiled a bit ruefully. Yes, and she is a lot older (66) now than when she wrote it in 1975. But, really, the songs sounded fresh and the band members all looked good under the lights. Buckingham is still king of the skinny jeans.

A midset highlight was “Tusk,” the title song of the artistic triumph/commercial bomb of a double-album from 1979. The song built layer by layer, Fleetwood and the finger-picking Buckingham leading the charge. Adding to the controlled chaos were sampled big-band horn riffs and the original 1979 video with the University of Southern California Trojan Marching Band playing on the huge backing screen.

John McVie, who is battling an unspecified cancer, was the old-school stoic rock bassist, and the lanky, pony-tailed Fleetwood spent most of the night (of course) behind his drum kit, a tribal master overseeing all and providing the pulse. He laid down a blistering drum solo during “World Turning” – yelling “Let it out! Give it up!” – and then, after three more songs, spoke the final words.

He saluted his 98-year-old mother, whose birthday it was, recalled her seeing Fleetwood Mac play at the old Boston Garden, tossed out a few more niceties and left us with this: “Most of all, be kind to one another.”