When you have a record in your quiver like Rumours, one of the best-selling albums of all time with 45 million copies sold, you can kick off a concert like Fleetwood Mac did Saturday in its second sold-out stop at TD Garden this month. Especially if you have Christine McVie back after a 16-year retirement to join Stevie Nicks and Lindsey Buckingham in restoring all three of the lead singers from that 1977 classic.

Hence came the “Keep us together” chorus of opener “The Chain,” one of four straight jukebox-worthy tunes from Rumours, followed by Nicks’ signature 1975 smash “Rhiannon.” Yet beyond the nostalgic joy of having all three voices harmonize those vintage hits, Buckingham then announced a new “profound and prolific chapter” for the band, an allusion to songs reportedly in the works for a comeback album.

But no new songs, solo songs or pre-Buckingham/Nicks songs showed up in Fleetwood Mac’s two-and-a-half hour set, which actually grew stronger as it branched deeper into this quintet’s musical personalities (lengthy banter aside). Pianist McVie, the eldest band member at 71, beamed positivity into edge-of-sappy pop like “Say You Love Me” and “Over My Head.” Nicks tempered her witchy mystique for earthy, resonant delivery even in mid-set “Sisters of the Moon” and “Seven Wonders,” which she admitted wouldn’t have been done if not for its inclusion in the TV series “American Horror Story.” Buckingham hit virtuoso extremes from solo acoustic selections to his stinging, finger-picked guitar climax to “I’m So Afraid” while stoking the rock edge of “Go Your Own Way” with tribal drummer Mick Fleetwood, who fueled the energy of “World Turning” despite his overdone solo bash. Only bassist John McVie, recovering from cancer surgery, played the silent partner.

They all looked good and sounded spot-on musically and vocally, so did they really need three female backup singers, an extra guitarist and an extra keyboardist? “Tusk” was powerful before pre-recorded horns synced to video of the USC Trojan Marching Band that graced the album. Band members seemed in fine spirits as well, complimenting each other left and right, apparently quite sincere and happy about it all. Granted, they’re boosting a lucrative brand, starting with pricey sold-out concert tickets. And they must be in better mental and physical shape than in the cocaine-fueled days that Rumours was made, when relationships (between Buckingham and Nicks as well as the divorcing McVies) were in tatters.

Mac fans (especially many who never caught this full classic lineup) would do well to jump on this bandwagon -- if they can afford a ticket, and perhaps before any new songs arrive for better or worse (Saturday’s main misstep was 1987’s glossy “Little Lies,” set to video of made-up young eyes and lips). Beyond a date this Saturday in Hartford, Conn., the band just added shows into the new year, including the Dunkin’ Donuts Center in Providence, R.I. on Jan. 28 and Connecticut’s Mohegan Sun on Feb. 7.

Stevie's been wearing the new shawl that was designed for her by Celeste Meyeres (here's a closer look at the shawl). She first wore it in Columbus on October 19th and has had it on for every Rhiannon performance since.


The legendary rock and roll band, Fleetwood Mac, rocked The Palace of Auburn Hills late last week and while the band may not be comprised of any Detroiters or even anyone from the great state of Michigan, that doesn't mean that a famous Motor City resident couldn't jump on stage and lend the group a hand during the Motown stop of Fleetwood Mac's current tour. So that's just what Detroiter Kid Rock did.

Throughout the two-and-a-half hour performance, the band called out to the crowd, with guitarist Lindsey Buckingham dedicating their hit song "Big Love" to Kid Rock. After singer Stevie Nicks again mentioned Kid Rock by name before she sang the Fleetwood Mac favorite "Landslide", Rock finally made his way to the stage to the massive cheer and roar from the crowd. Rock, in his signature trucker hat, came up from behind Nicks and gave her a reverse bear hug.

Last Wednesday night's visit to The Palace for their "On With The Show Tour" was the second trip to the Detroit area in just over a year for the band, but this time they brought around longtime keyboardist Christine McVie to fill out the band, replicating the famous lineup that made the band so popular during the 1970s and 1980s. Last year, McVie did not tour with Fleetwood Mac during their International Tour and has not actually performed live with the band for 16 years, so even for fans who attended last year's show, it was kind of still worth the price of admission.

Nicks joked about the return of McVie, who has not been seen on stage with the group since their 1998 "The Dance Tour", after the band walked out at the beginning to say hello to the crowd: "I guess you did notice there is yet another blonde on the stage. Two blondes are better than one!"

Fleetwood Mac took every advantage of having McVie back in their midst, performing a number of their early hits that McVie took lead on, including "You Make Loving Fun", after which McVie cried out "Thank you, Detroit!" It has been no secret over the last few decades that Fleetwood Mac can get pretty antagonistic with one another, so it was not only refreshing, but a warm sight to see the aging and "peace-loving hippies" make nice long enough to put on a wonderful show.

Throughout the night, the band was helped along by several side musicians and a trio of backup singers to the side, but Fleetwood Mac showcased their finely-tuned talents and everyone, especially Buckingham on guitar, was electric during the skilled performance.

Everyone seemed happy to have McVie back and Buckingham told the massive crowd at one point that her return was "a brand new, beautiful, profound, poetic chapter that will bear much fruit." Who knows just what could be in store the next time the group comes around Detroit? 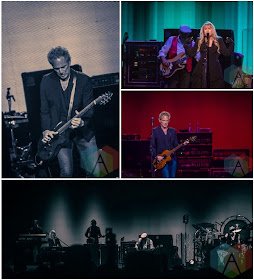 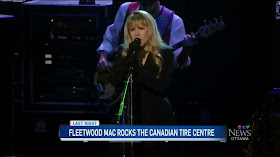