by Adam Graham
The Detroit News


Fleetwood Mac celebrated its long history with a two-and-a-half hour concert at the Palace Wednesday that saw a cameo from hometown rocker Kid Rock.

Yesterday's gone, as the song goes, but it was a celebration of yesterdays gone at the Palace of Auburn Hills on Wednesday night as Fleetwood Mac hit the stage for a 2 1/2 hour love fest honoring keyboardist Christine McVie's return to the band after a 16-year absence. It was an occasion to look back at the group's legacy with fresh eyes, even though it had only been a year since the band — sans McVie — had been here in concert.

Even Kid Rock got in on the action, hitting the stage midway through the show after Lindsey Buckingham dedicated "Big Love" to the hometown rocker and Stevie Nicks mentioned him during her intro to "Landslide." As "Landslide" was coming to a close, Rock hustled onto the stage — his American Badass trucker hat atop his head — and stood behind Nicks, wrapping his arms around her in a reverse bear hug. Rock's appearance brought the crowd to its feet and jump-started the show's revved-up second half.

Rock's walk-on aside, it was McVie's night to shine, and she brought a wave of early cheers two songs into the show when her signature vocals opened "You Make Loving Fun." "Thank you Detroit!" she exclaimed at the close of the song. (The current tour marks her first outing with the band since 1998's campaign behind "The Dance.")

"I guess you did notice there is yet another blonde on the stage," Nicks said after McVie's brief hellos. "Two blondes are better than one!" She then asked McVie, "where you been?" but the answer was beside the point. This tour is about the famously contentious band coming back together for one more go-round and fans having one more shot at seeing them back together.

The packed house proved there was plenty of interest in the billing, and the Rock and Roll Hall of Famers delivered a solid 24-song show of hits and album cuts from its long and winding history. Everyone got a chance to shine, from Mick Fleetwood's carnival ride drum solo in "World Turning" to Nicks' free-form interpretive dance during "Gold Dust Woman," but it was Buckingham's searing guitar solo during "I'm So Afraid" that was the night's highlight.

The band's stage set-up was simple, with a largely open stage backed by a stage-length video screen that projected on-the-nose images cued to the songs (gold dust and a woman during "Gold Dust Woman," for example). The band was augmented by several auxiliary musicians and a trio of backup singers, who added ghostly howls to "Sisters of the Moon."

The interplay between the band members was lively, especially with Buckingham and Nicks, who took on "Landslide" together. Buckingham joined McVie at the close of the show for a poignant reading of "Songbird," a quiet capper on the night after a free-wheeling "Silver Springs" brought the first encore to its end.

It's clear McVie's return has energized the band, sparking "a brand new, beautiful, profound, poetic chapter that will bear much fruit," as Buckingham put it at one point. Yet for all the talk about the group's future, Wednesday's show was a nostalgia play, the youngest songs in the set older than this year's Rock Hall nominees. Not that there's anything wrong with that, and there's plenty to be said for playing the hits to a receptive audience. But call it what it is.

"Don't Stop" came late in the show, and while the song's and the band's optimistic message still rings, it's an ironic anthem for a band that is focused on raising a glass to yesterday. 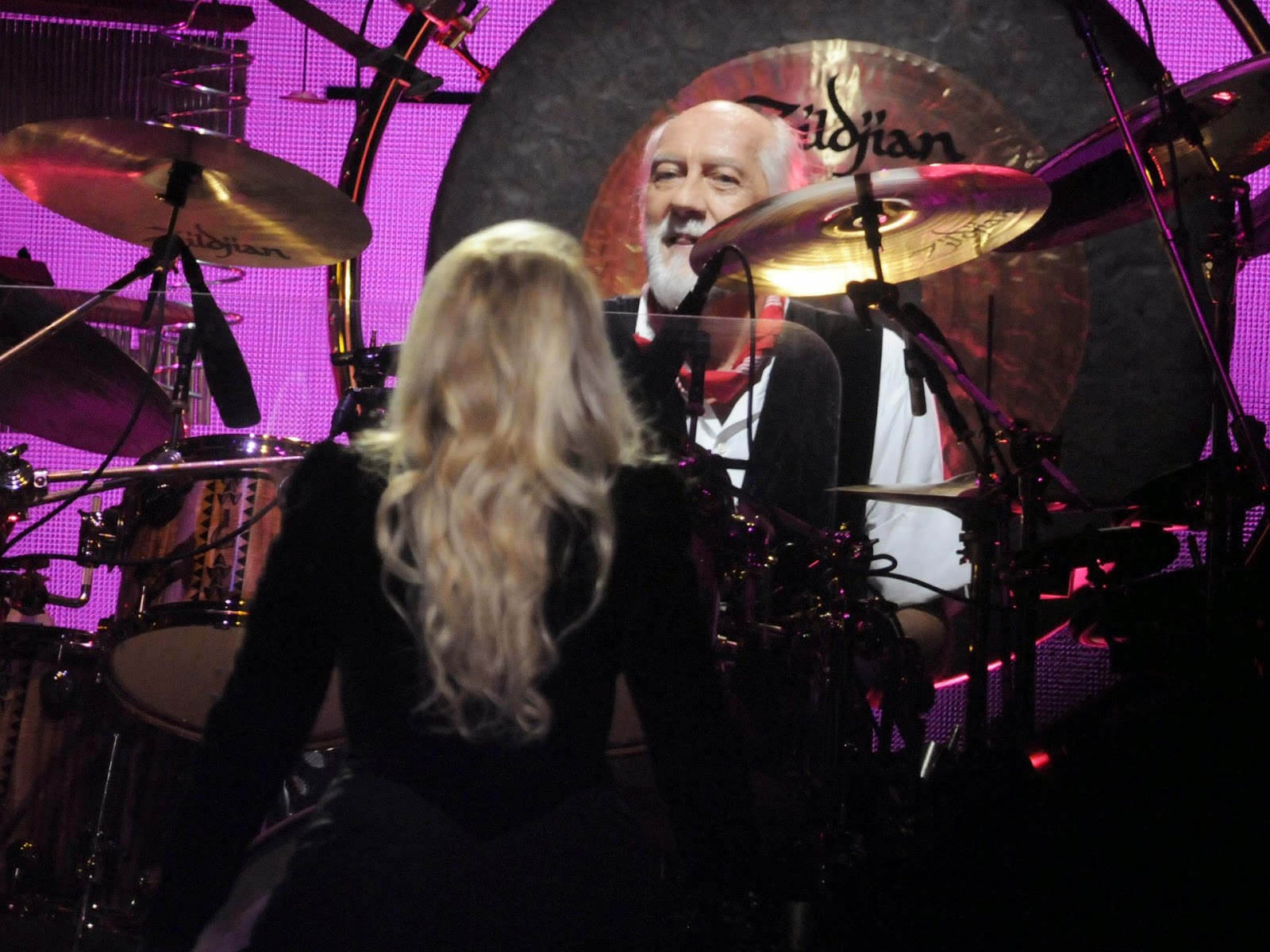 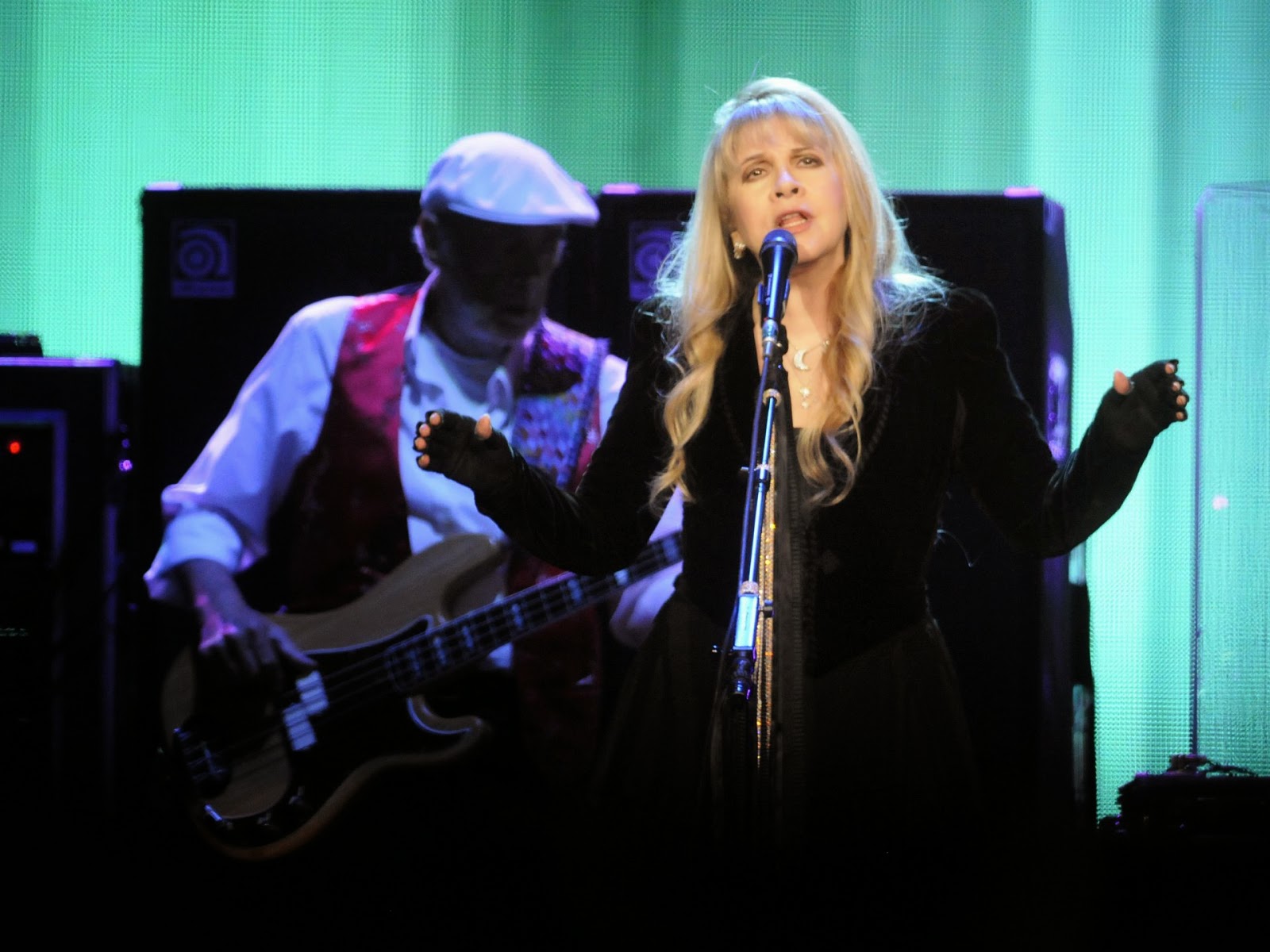 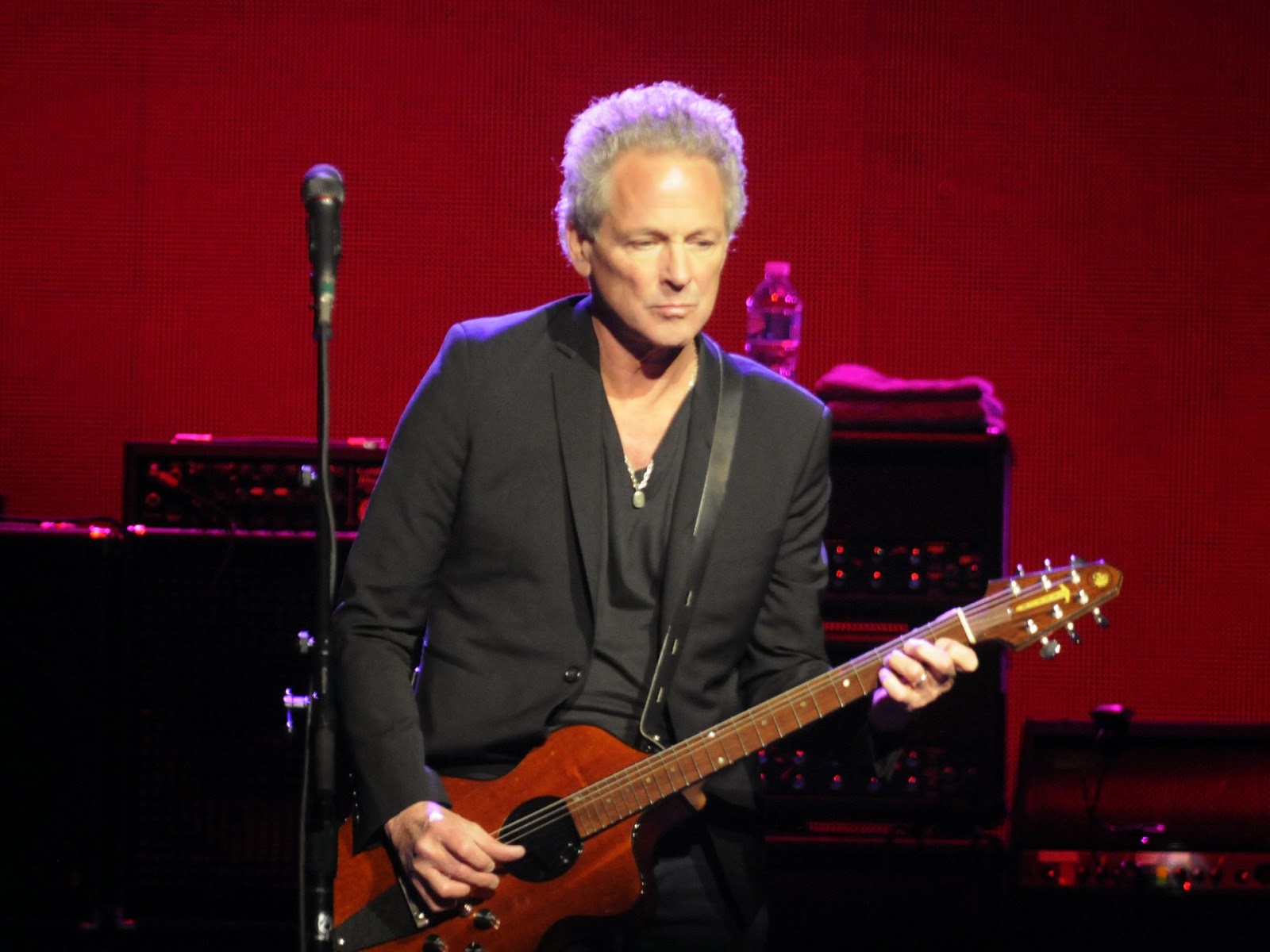 Above photos by Steve Perez

Above photos by Ken Settle

AUBURN HILLS >> Two songs into Wednesday’s Fleetwood Mac show at The Palace of Auburn Hills, Christine McVie and Stevie Nicks faced each other as they chorused: “I never did believe in miracles, but I’ve a feeling it’s time to try.”

McVie’s return to the Mac is something of a rock ‘n’ roll miracle, and she was welcomed with a roar. As Nicks said after “You Make Loving Fun” wrapped: “Two blondes, more fun!”

The last time the “Rumors” lineup — Lindsey Buckingham, Mick Fleetwood, McVie, her ex-husband John and Nicks — walked off the Palace stage together was Nov. 21, 1997, during “The Dance” tour. Seventeen years later, they played a rejuvenated show that celebrated McVie’s return, relied on the hits and gave a nod to the band’s place in pop culture today.

The reunion means a more balanced division of labor than when the group visited Joe Louis Arena last year as a four-piece. Of the 24 songs Wednesday, McVie, 71, sang lead on about a third of them. Her voice remains supple, and displayed surprising clarity and range when she reached back to her first hit, 1975’s “Over My Head.”

Fleetwood, 67, came to the front of the stage and played a portable kit, giving the song an intimate feeling with all five members in close quarters.

Nearly every catchy McVie single made an appearance, including “Say You Love Me,” “Little Lies” and “Everywhere,” when she came out from behind the keyboard and sang up front with maracas in hand.

“Thank you guys, for letting me do this again,” she said.

McVie’s ex-husband was another reason the “On With The Show” tour seemed unlikely. The group canceled a tour of Australia and New Zealand last year when the stoic bassist was diagnosed with cancer, but he returned after completing treatment.

Nicks, 66, brought more energy than she has in years. “Dreams, “Rhiannon” and “Sisters of the Moon” came early, as did 1987’s “Seven Wonders,” resurrected after Nicks’ appearance on the TV show “American Horror Story” this year.

Nicks’ voice isn’t the same instrument it was three decades ago, but she warmed considerably as the show went on and hit a first peak on “Landslide,” standing with ex-boyfriend Buckingham, 65.

The guitarist had referenced “Mr. Ritchie” earlier, but Kid Rock’s appearance came at an unexpected moment. The Clarkston rocker, wearing an “American Badass” baseball cap, surprised Nicks just as she was finishing “Landslide,” giving her a hug and peck on the cheek.

Buckingham, the Tasmanian devil of the band, leapt across the stage in jeans that could’ve been taken from a Brooklyn hipster, yipped, shrieked and, later, ended “I’m So Afraid” by pawing at the guitar with his hands.

“Fleetwood Mac is a band that has somehow grown, evolved and really persevered through the good times and the bad, and that is clearly a part of what makes us what we are,” he said.

The deepest cut in an otherwise greatest hits set was “I Know I’m Not Wrong,” a track from “Tusk,” the eclectic double LP that followed “Rumors.”

The intro to the “Tusk” album’s title track was given a jazzy spin before building into a crescendo, with McVie picking up an accordion and clips running on the big screen of the USC marching band that played on the record.

Nicks showed a return to form with “Gold Dust Woman,” walking out for the song with a gold shawl over her black outfit. The band stretched the “Rumors” closing track to twice its original length, and Nicks vamped, wailed and twirled in the way that made her famous, before doing a long interpretative dance.

The first encore, “World Turning,” felt complete again with McVie’s voice back in the mix, and Fleetwood stirred up the audience with wild barks and catcalls during his drum solo. Then it was “Don’t Stop” and “Silver Springs,” after which Nicks and McVie walked off stage with hands linked.

Fleetwood Mac’s return to Auburn Hills ended with a simple, circular spotlight on McVie, who sat at the piano for “Songbird,” just the way shows on the “Rumors” tour were closed.

Fleetwood was the last to leave the stage.

“Remember, the Mac is most definitely back!”

By Gary Graff
The Oakland Press

Stevie Nick’s dedication of “Landslide” to Kid Rock caught fans -- and Kid Rock himself -- by surprise on Wednesday night, Oct. 23, during Fleetwood Mac’s concert at the Palace of Auburn Hills.

But Nicks says it was a heartfelt gesture, and that Rock walking on stage to embrace her was “an unforgettable moment.”

“I have known Kid since 2001~ and we have had a very special friendship ever since,” Nicks said Thursday via e.mail. “We had the special opportunity to spend four days at the Montreaux Jazz Festival in 2006 with (the late Atlantic Records co-founder) Ahmet Ertegun, me, Kid, Robert Plant, Stevie Winwood, Nile Rodgers, Chaka Khan and more -- each of us hand-picked by Ahmet~.

“It was adult summer camp in Switzerland. We relate on many levels. Behind (Rock’s) crazy flamboyance lies the most amazing person. We have always joked that if I had had a child~ it would have been him. From that comes the dedication on stage during the Detroit show.”

After Nicks announced the song dedication, Rock strolled on stage, embraced her from behind and kissed her on the cheek. The two remained in a kind of slow dance until the song finished, when Nicks turned around to return the hug and kiss. Rock also embraced Fleetwood Mac guitarist Lindsey Buckingham on the way off stage.

Rock said Thursday that he knows Nicks “pretty well through the last 10 years. Stevie has always declared me ‘the rock n roll love child’ she never had.” Going on stage, he added, was a “spontaneous” decision. “I told Stevie when I surprised her that her security was not very good -- joking, of course,” he said. “They sounded great, I thought.”


Beautiful shots of the band by Chris Schwegler
View gallery at Schwegweb.com

LANDSLIDE (Kid Rock comes in at the end)