Stevie Nicks: 24 Karat Gold - Songs From The Vault
by Brian Boyd
Irish Times
★★★★ out of 5 stars 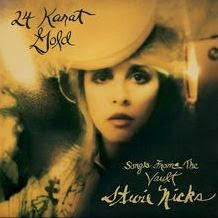 A selection of old demos, some stretching back to the 1960s, the eighth studio album by one of the voices of Fleetwood Mac is one of the best things she has ever done. With perspective, she sings these songs with a lovelorn resignation, imbuing them with a rare sense of pathos and philosophical regret. Lady is a rueful, self-doubting ballad while Starshine is turbo-charged FM rock. Nicks’ voice is always a thing of wonder; from easy-listening Laurel Canyon-type stylings to fuzzed-out rock and electrified folk, she can handle anything. On the standout Blue Water, she sounds as forlorn as early Gram Parsons, while I Don’t Care is blues rock perfection. Contemporary retrospection this may be, but she gets to the emotional core of almost everything here. A beguiling collection of songs.

Stevie Nicks 24 Karat Gold: Songs from the Vault
by Stephen Thomas Erlewine
All Music
★★★★ 1/2 stars out of 5


With the subtitle "Songs from the Vault," you'd be forgiven if you thought 24 Karat Gold was an archival collection of unreleased material and, in a way, you'd be right. 24 Karat Gold does indeed unearth songs Nicks wrote during her heyday -- the earliest dates from 1969, the latest from 1995, with most coming from her late-'70s/early-'80s peak; the ringer is a cover of Vanessa Carlton's 2011 tune "Carousel," which could easily be mistaken for Stevie -- but these aren't the original demos, they're new versions recorded with producer Dave Stewart. Running away from his ornate track record -- his production for Stevie's 2011 record In Your Dreams was typically florid -- Stewart pays respect to Nicks' original songs and period style by keeping things relatively simple while drafting in sympathetic supporting players including guitarists Waddy Wachtel and Davey Johnstone and Heartbreakers Benmont Tench and Mike Campbell. It's certainly not an exacting re-creation of Sound City but Stewart adheres to the slick, hazy feel of supremely well-appointed professional studios, so 24 Karat Gold has a tactile allure. Sonically, it's bewitching -- the best-sounding record she's made since 1983's The Wild Heart but, substance-wise, it's her best since that album, too. If there aren't many remnants of the flinty, sexy rocker of "Stand Back" (the opening "Starshine" is an exception to the rule), there's enough seductive, shimmering soft rock and the emphasis on Laurel Canyon hippie folk-rock feels right and natural. Retrospectively, it's a surprise that Nicks sat on these songs for years, but that only indicates just how purple a patch she had during Fleetwood Mac's glory days. It's a good thing she dug through her back pages and finished these songs, as she's wound up with one of her strongest albums.


Fleetwood Mac may have just started a mammoth tour of the United States, their first with songbird Christine McVie in 17 years, but Stevie Nicks has still managed to release a new solo album, this month.

24 Karat Gold: Songs From the Vault, is a collection of 14 songs from Nicks’ enormous back catalogue of demos that never made it onto her records- songs which were written between 1969 and 1995.

Recorded over a three-month period, Eurythmics’ Dave Stewart was once again on production duties. After producing her last album, In Your Dreams, which was something of a let-down both musically and lyrically compared to 2001’s Trouble in Shangri-La, 24 Karat Gold makes much more of a statement than both of the aforementioned releases.

This may be, in part, due to Nicks herself also producing the record, with the help of long-time collaborator Waddy Watchel, who featured heavily on her early solo albums.

Kicking off with the Rolling Stones-esque Starshine, Nicks’ unmistakeable nasal voice remains as constant as her chiffon scarves and platform boots.

Next up is The Dealer, which was demoed for both her first solo album, Bella Donna, and her third, Rock A Little. Finally making it onto 24 Karat Gold, it is very similar to the superior first version, demoed for Bella Donna.

Other fine up-tempo tracks include I Don’t Care, the token snarling ‘rock-out’ moment, which features at least once on most of Nicks’ solo records; and Cathouse Blues, more honky tonk in flavour.

That being said, this album’s finest moments take shape in the form of its darkest tracks. The title track begins with a pounding bassline, and goes into a haunting piano rhythm and jarring guitar part from Mr Watchell, as Ms Nicks sings about the chains of love.

Mabel Normand is another highlight on the record. Originally demoed for the Rock A Little album in 1985 – a time when Nicks was paying the price for her years of cocaine abuse – it documents the life of the silent film actress it is named after, who had the same substance battle several decades before. It becomes clear that Nicks is writing about Normand and herself in the song, as she sings: “She did her work, but her heart was quietly crying. I guess she even felt guilty about even dying.”

Gorgeously simple ballads, such as If You Were My Love and Hard Advice, nicely juxtapose the rockier material on the album.

24 Karat Gold is probably the most consistently fine selection of Nicks’ self-penned material since her 1983 album, The Wild Heart. A fine selection of similar yet different songs, each holding their own within this album, which is not something that could be said for Nicks’ last solo effort.

This is a real insight into the last 45 years of the life of one of the most unique and mystical talents there has ever been. Nicks has held nothing back, this time.