Adam and Stevie reflect on how they originally met on The Voice's first season and became friends thereafter. Plus, Stevie discusses why Team Adam is so special and what it's like to be an advisor. 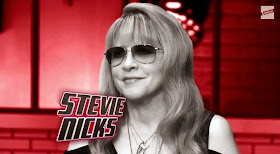 See a preview as Adam Levine and his advisor, Stevie Nicks, get his team ready for their upcoming battles.


STEVIE NICKS "24 KARAT GOLD - SONGS FROM THE VAULT"
Out Now! Order From Stevienicksofficial.com