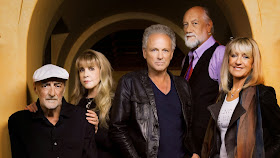 Ticket will be available either with Ticketmaster or Livenation

There are a lot of spaces between dates so there will either be multiple shows in certain places added or more dates announced.