Fleetwood Mac are raking in the dough!

With only 6 shows reported so far to Billboard's Boxscore it's clear that the On With The Show Tour will be massive when all is said and done in terms of overall gross ticket sales and attendance. Fleetwood Mac will surely land in the top 10 grossing tours of the latter half of 2014.

If you calculate the 29 shows they've performed so far by the average gross they've been achieving so far, except bringing it down to 1.6 million average per show to factor in the smaller grosses in the smaller cities they've been to, this puts the tour at between 40-50 million so far. The full 40 dates in 2014 at the same average gives you about 65 million.  Huge numbers! 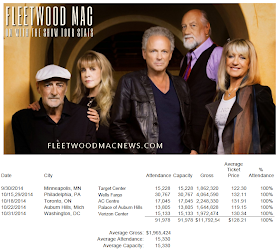