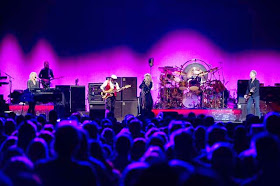 
Fleetwood Mac played without an asterisk Monday during a sold-out show at Sacramento's Sleep Train Arena.

The superstar band offered all its hits and all its lead singers, with Christine McVie having returned to the road after a 16-year absence.

McVie was elegant and unassuming Monday, just as she was during the band's "Rumours" heyday. Chic in black jeans and a leather jacket, the 71-year-old singer/keyboard player seemed happy to be back, whether she was in the spotlight or assuming a utility role by playing accordion on "Tusk," the still-wild-and-weird title single from Fleetwood Mac's 1979 album.

McVie was not so unassuming that you did not notice, when the band kicked into the McVie-led "You Make Loving Fun" as its second song of the night, that an intact Mac beats the four-fifths crew that toured in her absence.

The band's 1970s and '80s success lay in its musical diversity. In how it made room for McVie's graceful melodies, Stevie Nicks' airy poetry and Lindsey Buckingham's more coiled, intense songwriting, then joined those styles in a signature sound cemented by three-part harmonies.

But those shows never felt like complete Mac. Not like the Mac that killed it Monday night on the band's McVie-led 1987 hit "Little Lies." A harmony bonanza, the song sounds edgier live than on record.

No one looked happier to see McVie than Buckingham, the band's creative engine and biggest champion. McVie's return, Buckingham said, marked a new period for the band that appeared likely to be "poetic" and "prolific."

For a 65-year-old to be mapping out a rock 'n' roll future with a 71-year-old (and with Nicks, 66, Mick Fleetwood, 67, and bassist John McVie, who turns 69 Wednesday) is inspiring. It also speaks to why the group endures, 37 years after "Rumours" and its surrounding excess and romantic strife. It's through Buckingham's sheer will.

Christine McVie's road rustiness showed at times Monday, especially during the ballad "Songbird," during which she clearly had trouble hitting notes. But even at these moments, the band was better with her than without her. The notes might not all still be there, but the reassuring, husky quality of her voice is.

McVie seemed shy as she thanked her bandmates and fans for their support. Nicks was not shy at any point. Not when turning "Gold Dust Woman" into a welcome bit of performance art involving a sparkly shawl, or when regaling the audience with a story from her days as a Bay Area rock baby.

She was in a band with Buckingham that once opened for acts such as Jimi Hendrix and Janis Joplin. After Nicks discovered all the famous San Francisco rock women shopped at a boutique called Velvet Underground (which Nicks name checks in "Gypsy"), she visited the store.

She couldn't afford anything in it, Nicks told the crowd. But she had an epiphany while there, that one day she would be famous and play for big crowds. It happened, Nicks said, gesturing toward the 15,000 people watching her in Sleep Train Arena.

You gotta love Nicks for barely bothering with the "humble" part of humble bragging. But why bother with humility? Nicks has been an icon for decades.

"Icon" gets used too often. But add up Nicks' one-of-a-kind, nasal-yet-pleasant singing voice, shawls, scarves, all-summer-long boots and the creation, last year, of an "American Horror Story: Coven" witch character who worshipped the singer, and there it is: icon.

Now that you know to whom the term legitimately can be applied, don't go calling Taylor Swift an icon.