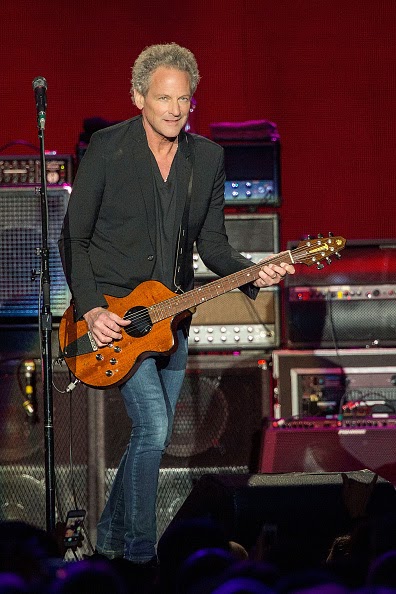 Fleetwood Mac performed the first of 3 shows at The Forum in Inglewood, CA last night. They perform again tonight (Nov 29th) and a third show is scheduled for December 6th.

“Our ‘Songbird’ has returned,” happily proclaimed Fleetwood Mac drummer and co-founder Mick Fleetwood last night, the first of the Hall of Fame-inducted band’s three dates at the Forum, as he introduced Christine McVie. The keyboardist/vocalist had left Fleetwood Mac 16 years ago but decided to rejoin the group who launched this On with the Show tour in celebration.

Everyone in the packed arena shared their enthusiasm over McVie’s return. Those on the floor stood the entire time, beginning with the first three songs (“The Chain,” “You Make Loving Fun” and “Dreams”) that were all off the band’s 1977 hit album, Rumours. McVie admitted that since the Fleetwood Mac was once based in Los Angeles, she really loves it here and was happy to be back before transitioning into “Everywhere.”

While McVie’s musicianship and vocals shone on that song, as well as “Say You Love Me” and “Little Lies,” all of the other members were showcased as well. Lindsey Buckingham showed that the years haven’t affected his smooth vocals or guitar prowess, although he jokingly feigned stiff fingers before “Big Love.” He mesmerized with his finger picking on “Never Going Back Again,” delivered a searing solo during “I’m So Afraid” and led the entire audience in sing-alongs of “Go Your Own Way” and “Don’t Stop.”

And there are really no words adequate enough to express the magic of Stevie Nicks. Her performances were memorable each time she stepped to the mic to sing or tell a story and danced around the stage. From the beautifully haunting “Rhiannon,” “Gypsy” and “Sisters of the Moon” to “Seven Wonders” (after which she gave a shout out to “American Horror Story” for giving the song new life), “Gold Dust Woman” (when she draped herself in a shimmering gold shawl) and the legendary “Landslide,” dedicated to her three goddaughters and featuring little white lights set in the ceiling to resemble twinkling stars.

Bassist John McVie proved he is the backbone of every song, while Fleetwood matched his beats with thunder from his drum kit during “Tusk,” featuring video footage of USC’s Trojan Marching Band. Fleetwood also delivered a heart-pumping solo in “World Turning,” the first song of the encore section of the evening, eliciting crowd participation by repeatedly saying, “Don’t be shy now!” 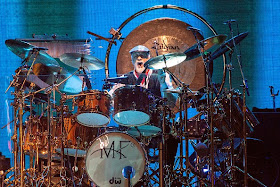 Leave it to Stevie Nicks, ever the mystical muse of Fleetwood Mac, to let us in on the secret – some combination of cosmic vibes, love and magic, and a simple cell phone call – that made the legendary band whole again some 16 years after singer and keyboard player Christine McVie retired from touring. 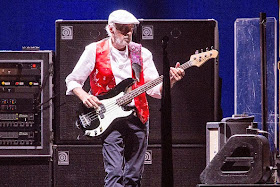 Yes, McVie picked up the phone and called Nicks in October 2013 to ask if she could come back to the band that had soldiered on with four-fifths of its classic lineup of Nicks, guitarist Lindsey Buckingham, bassist John McVie and drummer Mick Fleetwood. And of course Nicks told her she was welcome whenever and for always.

But that was just the product of deeper machinations in the universe, Nicks said at the close of the band’s sold-out show at the Forum on Friday, the first of four Southern California dates that includes a stop at Honda Center in Anaheim on Sunday, Dec. 7. 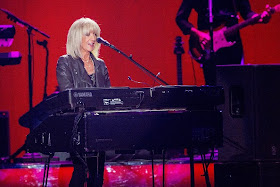 “I think that last year at some point in October there was there was some magical thing that went out from all our fans saying, ‘It’s time for Christine to come back,’ ” Nicks said. “We are so thrilled that we got our girl back – you have magical powers.”

That the feeling was mutual – all that love and magic, natch – was clear from the start of Fleetwood Mac’s two-and-a-half hour show and a set that in its 24 songs included many written and sung by McVie that fans here hadn’t heard since a 1997 tour that included three nights at the then-Irvine Meadows and one at the Hollywood Bowl.

Though this On With The Show tour has run for 20-some shows so far the opening number, “The Chain,” seemed a little rough at the start, the harmonies of Buckingham, Nicks and Christine McVie not quite meshing as smoothly as they should. All felt better though by the opening keyboard bit of the next song, “You Make Loving Fun,” a Christine McVie number that drew tremendous cheers as the crowd welcomed her back into the fold.

This is a band whose fights and fractures were legendary during the height of their fame. Nicks and Buckingham and the McVies each were couples, and then were not. Drug addictions and interband rivalries caused rifts even as Fleetwood Mac made some of the best albums of the era, from the self-titled “White Album” to “Rumours” and “Tusk.”

That they survived all that then is a minor miracle; that they perform as well as they do when they’re all between the ages of 65 to 71 years old must be an even sweeter success.
The show largely unfolded with the three singers taking turns on the songs they wrote and sang lead on. Early in the set that found Nicks singing “Dreams” and “Rhiannon,” the latter of which found her all a-twirl in her gauzy black shawl, bowing deeply to acknowledge the cheers at the end.

Buckingham’s “Second Hand News” and “Tusk” put a spotlight on his high-energy vocals and still-dazzling guitar work, but throughout the night it was the McVie spotlights such as “Everywhere” and “Say You Love Me” that felt just a bit more special given her absence on stage for so many years.

Given how well-known these songs all are you’d be forgiven for thinking there’d be few moments of genuine surprise or deeper emotional connection, but throughout the night many of these older tunes felt fresh in the context of the gang getting back together again.
This was the case even when it was only Buckingham on stage by himself, singing “Big Love” and talking about how the feelings of alienation he felt with the band when he wrote it have faded to meditation now, or later when Nicks joined him for a beautiful take on the always lovely “Landslide.”

Nicks was her usual endearingly hippy-dippy self, at one point giving a shout-out to the TV series “American Horror Story” for featuring the song “Seven Wonders” earlier this year and thus getting it back into their set. She later told a long and rambling anecdote about her earliest days as a singer in San Francisco pre-Fleetwood Mac and how a visit to the lady rock star clothing store later inspired the song “Gypsy.”

Highlights in the final stretch of the main set included McVie’s “Little Lies,” a take on “Gold Dust Woman” that from the ominous guitar line and cowbell opening through Nicks’ gold-shawl-twirling performance was perhaps the tour de force of the show. They closed with “Go Your Own Way” with Buckingham taking the lead vocals but both Nicks and McVie joining in as it built to the finish.

The encore opened with “World Turning,” which featured Fleetwood on an old-fashioned drawn-out drum solo that you didn’t really mind given how animated and happy he seemed, then “Don’t Stop,” which had most of the Forum singing along.

After one more break, McVie returned alone to a piano at center stage, singing “Songbird,” the nickname Fleetwood gave her during the band introductions, alone for a moment, then joined by Buckingham on guitar. A fitting final spotlight for the prodigal daughter now back in the fold. 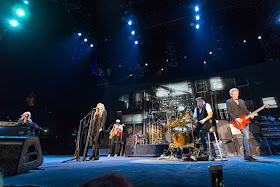 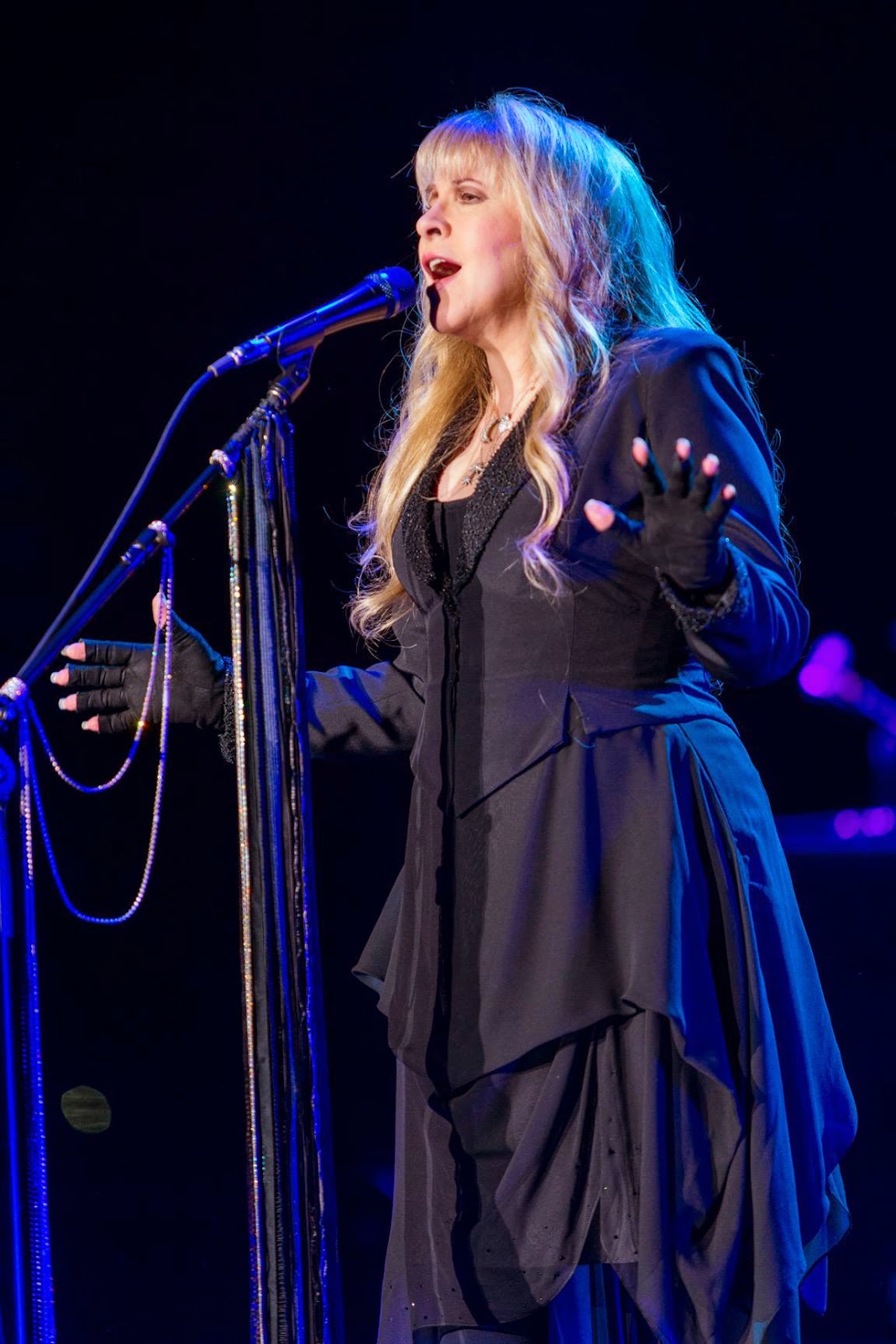 Above two photos by: Paul A. Hebert (Forum Photos)


SAMPLE FROM EACH OF: Landslide | Never Going Back Again | Over My Head