Review: Fleetwood Mac Live in Portland "I Know I'm Not Wrong easily the most amusing song of the night visually" 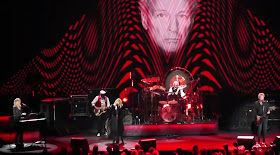 Growing up, I hated Fleetwood Mac. Maybe part of the problem was I usually lumped them in with the Eagles, a band that is truly terrible, or with my general distaste for classic rock dinosaurs, borne from a childhood spent listening to Phil Collins and Sting greatest hit tapes on every single family roadtrip. Nirvana and Pearl Jam and Hole hit right when I got my first Discman, and soon after, my older next-door neighbor was giving me Radiohead and Built to Spill albums. Fleetwood Mac weren’t just uncool: They were the bloated, overwrought excess of everything a young indie-rock fan and Spin subscriber stood against. But then in college, a close friend lent me a copy of Tusk, saying it was their White Album and also the one where the band’s drug use was a little too intense. I grew older, went through a few breakups, and grew to truly love my former enemies.

Fleetwood Mac have been touring a lot the past few years (including an appearance at the Moda Center just last year), but the big news here is the return of Christine McVie after a 16-year absence. Though billed as the “On with the Show” tour, there was nothing resigned about the performance Saturday night, except the few moments when the New Age-y visuals recalled a Cialis commercial. Snark aside, this really was a wonderful show. The whole band seemed genuinely stoked to have McVie back in the fold, as most of the pre-song banter featured Stevie Nicks and Lindsey Buckingham or even Mick Fleetwood gushing about being able to play with her again. Fleetwood Mac has played most of these songs hundreds of times but they were still loose and nimble onstage, occasionally stretching out a song but never indulging in that classic rock trope of just jamming forever, man.

The hits from Rumours—”Dreams,” “Go Your Own Way,” “Gold Dust Woman”—naturally got the biggest responses, and the band smiled its way through through every moment. They were augmented by three backup singers and two sidemen on guitar and keyboards, but the mix was always light, centering on Nicks’ husky voice, Buckingham’s exciting guitar playing and the subtle backbone of the rhythm section, which just kept on beating amidst a sea of 20,000 people singing along to every single word.

But for me, the real pleasure was when the band dived deeper into their back catalogue, dusting off gems like “Tusk” and Tango in the Night’s “Little Lies” and “Big Love,” which Buckingham performed solo while showing off his incredible fingerpicked guitar playing. I nearly died when he played “I Know I’m Not Wrong,” my favorite song off Tusk and easily the most amusing song of the night visually, with his dismembered floating head projected on the screen behind the band mouthing the words through a sea of colorful clouds. Buckingham really is an amazing performer—at 65 years old, rocking skinny jeans and a tight black v-neck, he seems much younger than most of his contemporaries. Though not usually recognized as a guitar hero, his solos were revelatory, never overshadowing the song but pushing each hit to new heights.

During the encore, I realized this might be the first show I’ve ever seen without an opening band. I mean, who could realistically open for Fleetwood Mac? When Mick launched into a call-and-response drum solo during “World Turning,” I initially wanted to hate on the showmanship, but I actually found it rather endearing, just like when he came out front to play a smaller kit during a nice late set stretch of songs that included “Over My Head.” Sure, it was a little cheesy. But sometimes, we have to know when we are wrong, and just embrace the kitsch.