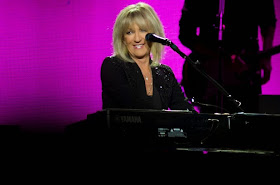 The chain has kept them together, after all these years. Rock & Roll Hall of Fame inductees Fleetwood Mac – the classic 1970s lineup of five – thrilled many baby boomers on a date night yesterday, as the band’s On With The Show tour triumphantly landed at the MTS Centre for a 2½-hour concert.

The mischievous 6’6” drummer, Mick Fleetwood, and his band co-founder, bassist John McVie (hence the Mac’s name), Lindsey Buckingham (guitars and vocals) and Stevie Nicks (vocals), who both joined back in ’75, and the returning songbird, Christine McVie (keyboards and vocals): five distinct personalities who have somehow stayed together and made it work, going on almost four decades. Buckingham came back after quitting for several years in the late ‘80s, but last night belonged without question to Christine McVie, who is touring for the first time in 16 years after a hiatus brought on by her fear of flying.


Fleetwood Mac opened with “The Chain” from Rumours (1977), silencing any doubts they’re still a ferocious rock band. The follow-up song was Christine McVie’s “You Make Loving Fun”, which got a roar of approval from the audience to welcome her back. “Thank you for giving me a second chance; you don’t often get that,” she said before “Everywhere” from 1987’s Tango in the Night. Still sounds great, by the way.

Many came to see Stevie Nicks, whose sexy, raspy voice on “Dreams”, followed shortly by “Rhiannon”, doesn’t quite soar as it once did, but has gained a smoky quality that she makes work. Nicks can still twirl the heck out of a shawl and, at times, when she was dancing she looked eerily like her 20-something self, shimmying under her black top hat.

Buckingham led the band in an explosive “Tusk”, the title track from their 1979 double LP, which sounded surprisingly current and vital, then a heavy version of “Sisters of the Moon” from the same album – a damn cool song that Nicks really sold on vocals.

Mid-way through their set, the Mac stripped it down for a few self-indulgent acoustic numbers that slowed things down a bit too much. Nicks took the stage for a truly gorgeous “Landslide”…she is “getting older too,” but the gypsy hasn’t lost any of her mystery, nor magic. There were a few other, shall we say, less-than-exhilarating parts of the show. The worst offender was Buckingham, whose solos – one in particular that seemed to go on forever (another beer, anyone?) – were clearly appreciated most by the notoriously egotistical guitarist himself. But still, seeing him sing “Go Your Own Way”, the mother of all bitter break-up songs, with Nicks some 37 years after their split is still a blast.

Fleetwood left his gigantic drum kit in the back of the stage for a smaller one up front. Watching him play in person, you can see he’s a fluid, effortlessly powerful drummer. His trademark fills put the punctuations on his status as one of rock’s greatest drummers. Later for the encore, his extended drum solo within “World Turning” from Fleetwood Mac (1975) was both awe-inspiring and hilarious, as only Fleetwood himself can be.

Meanwhile, apart from a couple of short bass breaks, John McVie hung back near the drums and made almost no impression on stage. He could have been mistaken for a session player, which is probably just as he likes it.