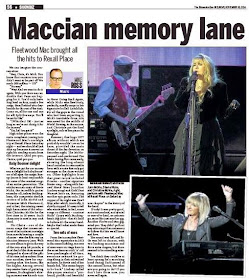 
We can imagine the conversation:

“Way! And we want to do it again. With you there we can double that. Fans are begging for it. You’d only have sing lead on four, maybe five songs. Stand behind your keyboards for the rest of the time. Come on, all for one and one for all! Split five ways. You’ll be set for life.”

“(Whistles) OK – just as long as we’re not doing it for the money.”

High ticket prices were the main complaint coming into Fleetwood Mac’s nostalgia trip at Rexall Place Saturday night – and we should all just shut up because it serves us right for stealing music from the Internet. Quid pro quo, Clarice, quid pro quo.

What we got for our money was a delight for Baby Boomers of all ages: the magic line-up (more or less) responsible for some of the seminal songs of an entire generation: The witchy woman mojo of Stevie Nicks, the incredible guitar wizardry of Lindsey Buckingham, the competent rhythm section of John McVie and drummer Mick Fleetwood, and at last, the missing sweet high harmonies of the reluctant Christine McVie for the first time in 16 years. Such chemistry is rare in any rock band.

The Chain – one of the many songs that causes seizures of incontinent nostalgia from merely hearing a couple of notes – was the first step on Maccian Memory Lane. With no new album to get in the way of the non-stop hit parade, a good deal of the show seemed designed to show off the gifts of its stars independent from one another, save for supporting roles. You know, like the Eagles. Among several impressive feats of guitaring prowess, Buckingham’s shining moment was his solo turn in Never Going Back Again, while Nicks was flawlessly, perfectly, scarfily raspy in her signature ballad Landslide. For all the guys in the crowd who had been expecting it, Mick’s inevitable drum solo was saved for the middle of World Turning, in the encore. And Christine got the final spotlight, solo at her piano for Songbird.

Rumours, that huge 1977 album without which we probably wouldn’t even be here, provided the main thrust of the fan devotion on Saturday night. The McVie-penned-and-performed You Make Loving Fun came early, showing the long-absent band member in reasonable form with a voice that only got stronger as the show wound on. Other highlights from that great record included Dreams – another signature Stevie song – along with Second Hand News (another Lindsey song) and Gold Dust Woman later on, featuring another epic guitar solo. The capper of the night was Don’t Stop, after which, ironically, it shortly stopped. It’s easy to tell who wrote what, in fact, some songs so different – contrast Nicks’ Gyspy with Buckingham’s Big Love – that it’s hard to believe it’s the same band. Maybe that’s what made them so special.

From the incomplete Fleetwood Mac experience in 2013 in this same building, two sets of exes were on stage here in the most famous rock ‘n’ roll love quadrangle of all time; everyone seemed be getting along in their advanced maturity. As Stevie said of her female foil, “She seems happy to be back.” Lindsey called this proper reunion a “profound, prolific and beautiful new chapter” in the history of the band.

If only! It was pretty good, not transcendent, not special or one-of-a-kind, as concerts go; more like just another gig. Another Fleetwood Mac gig, mind you. They didn’t pull out any extra stops than necessary to deliver the hits we all know and love. The sound was full, and little was left to chance, with two backing musicians and three extra singers, but there seemed to be something missing. You think they could’ve at least sprung for a marching band during Tusk instead of the canned horns, but what are you going to do? If you don’t love them now, you never will again.

Gross. Neither roll off the tongue with ease — so let’s just call this month our November of Nostalgia, what with veteran acts such as Darkroom, John Fogerty, Motley Crue and the smalls reliving their glory years on stages around Edmonton.

Saturday night was Fleetwood Mac’s turn — complete with the return of singer/keyboardist Christine McVie after a 16-year respite at her country manor in England.

“Welcome back, Chris!” gushed Stevie Nicks after the classic rockers performed their first McVie-led tune, You Make Loving Fun. “We’ve played about 22 shows and she seems pretty happy to be back.” 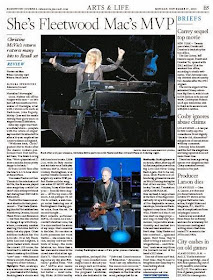 You make Fleetwood fun: Thanks to the re-inclusion of McVie, the fivesome played nine songs they couldn’t (or didn’t dare attempt without her) during their 2013 visit to Edmonton.

The first five tunes were almost identical to their previous set — The Chain (featuring John McVie’s sublime bass breakdown), Dreams, Second Hand News and Rhiannon — but then the Mac started to change it up with Everywhere, a summery number starring Christine McVie’s husky but airy pipes. Other additions included Say You Love Me, Over My Head, Little Lies and Songbird, a piano ballad which closed the concert. (Of course, the band had to subtract some tunes to make up for all these “new” ones — with Sara and Nicks’ solo hit, Stand Back, being two of the victims.)

Highlights: Tusk, as always, was a raucous crowd pleaser, punctuated with Lindsey Buckingham’s shouts and delirious horn bursts. Little Lies, with its fluty synths and intricate vocal interplay between McVie, Nicks and Lindsey Buckingham, was another blissful moment. It might very well be THE perfect Fleetwood Mac song.

Low notes: If I MUST offer a criticism, I’d say all the thank yous — from all three singers — off the top were a bit much. And perhaps I’d cut I’m So Afraid, a mid-tempo rocker featuring one of Buckingham’s blazing guitar solos, from the set. On second thought …

Most valuable performer: McVie, of course. As a kid, I couldn’t stand her voice, but I’ve since realized the errors of my ways. She’s essential to the Mac. No one else on Earth possesses her vocal timbre — she sounds like a rich, smokey red wine with hints of honey. She looks fabulous, too. More than a few men and women in the crowd marvelled at her age. She’s 71. “She’s been working out every day since February,” gushed Nicks. “Not me.”

McVie also seems to make everyone around her better — most notably, Nicks. (A little healthy competition, perhaps?) Her tangy voice sounded more supple than it did last year on songs such as Dreams, Seven Wonders, Gypsy and the poignant Landslide, which she dedicated to the “Universal Consciousness of Edmonton.” Awesome. “And I saw my reflection in the snooooooooooooow,” she warbled, putting extra emphasis on the four-letter word, perhaps just for us.

MacRoyalty: Buckingham was no slouch, either, showing off his furious guitar prowess on Big Love and Never Going Back Again. Not to be outdone, Mick Fleetwood offered a big-grinned drum solo on World Turning during the first of two encores. “Don’t be shy,” he said. Translation: APPLAUSE PLEASE.

Over my head: A large screen at the back of the stage intermittently lit up with images of Pre-Raphaelite women, raindrops, forests and Buckingham’s crazy faces. Otherwise, Fleetwood Mac’s set was short on stage props — and long on heavenly harmonies, impeccable musicianship and mutual love between band members.

Don’t stop: “May Fleetwood Mac come back ... again and again. Next time, they’ll need to bring a unicorn (or winged horse) — and Christine,” reads an excerpt from the Journal’s review of the band’s 2013 show.

One out of three ain’t bad. Next time, they’ll need to bring those new tunes they’ve been talking about.