Stevie Nicks Talks Challenges of Promoting Solo Album While on Tour with Fleetwood Mac: "I Don't Wanna Tick Anybody Off" 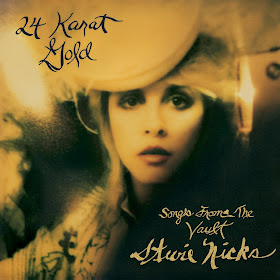 Stevie Nicks has an new solo album -- 24 Karat Gold: Songs from the Vault -- of which she's


justifiably proud.  She hasn't been able to spend much time promoting it, though, because her day job as the lead singer of Fleetwood Mac, currently out on a massive world tour, is keeping her pretty busy.  Last week, during a break in the tour, she appeared on The Tonight Show to perform "Lady," one of the new songs, but she says it's unlikely you'll see her do that onstage with the band.  Why?  It's complicated, says Stevie.

"I don't even know if the people in Fleetwood Mac have even heard this record.  Honestly.  We don't talk about it a lot," Stevie tells ABC News Radio. "It's like, y'know....it's not their thing.  So I don't push it on them, and I just let it go.  I don't wanna tick anybody off, and I don't wanna make people think that I'm not focused on Fleetwood Mac, because I totally am...but in my own time, then I can do anything I want, and I can promote this record."

As for the possibility of her taking time out during a Mac performance to spotlight a tune from 24 Karat Gold, Stevie says, "Could Christine [McVie] play 'Lady' and me sing it, and she sing a harmony?  Absolutely.  Will that happen?  Probably not, but maybe."  Noting that she really wanted her bandmate to hear the record, she laughs, "I put it on her iPod. I bought her an iPod and then put it on the iPod!"

24 Karat Gold: Songs from the Vault, which debuted in the top 10 when it was released in September, is a collection of songs that Stevie wrote mostly between 1967 and 1989, with a few from the '90s thrown in.  But Stevie explains that these songs aren't a bunch of rejects that weren't good enough to be included on albums: they just never made it for a variety of reasons.

"These weren't songs that weren't the 'better' songs.  Some of them were recorded by Fleetwood Mac and I didn't like it," she tells ABC News Radio. "You'll get three-fourths of the way into recording a song and you'll just go, 'I don't like the way it's coming out, so I'm pulling it.'  Same with my own producers: 'I don't like what you've done with the song, so I'm pulling it.'"  Or, 'There's too many fast songs,' 'Too many mid-tempo songs,' 'Too many ballads -- a ballad has to go.'  So, that's what happened to these songs.  These songs should have all been on records already."

As Stevie continues to eke out time to promote 24 Karat Gold, she says she is truly enjoying the Mac tour, since it's the first one to feature Christine McVie in 16 years.  "She's so excited and she gets, just, like sixteen-thousand people on their feet screaming several times a night," laughs Stevie. "And it's pretty spectacular.  So she's getting, like, spoon fed this amazing reaction of people being so happy that she's back that she's just thrilled, you know?  She just feels like she won the lottery!  So, it's pretty great to watch and I think it's really fantastic.  Everybody's in really good shape."

They'll have to be, considering the Fleetwood Mac world tour will stretch far into 2015.  That's why Stevie says she can't say right now if she'll join the rest of the band in the studio to record a new album, as Mick Fleetwood says he hopes she will in his new autobiography.

"I don't know, because nothing can be done on that until we're done, and we have another seventy shows until this American tour is done, then we have Australia, then we have Europe.  This isn't gonna be done until this time next year," Stevie tells ABC News Radio about the prospect of a new Mac album. "So, I don't know how I'm gonna feel in a year."

Fleetwood Mac is currently on tour in Canada. They'll return to the U.S. next week but have dates scheduled in North America through March.