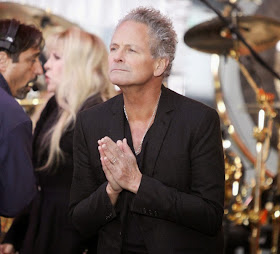 Lindsey Buckingham hinted that Fleetwood Mac's next album might be the band's studio swan song. During a chat with PBS' Tavis Smiley, Buckingham spoke about the new material he's been cooking up with returning keyboardist Christine McVie, revealing, "Before we started rehearsing the show with Christine, she came over and said, ‘Lindsey, I’ve got some rough ideas for new songs. She gave me a bunch of stuff to take home after we saw her in England when we played there. And I worked on it at home, took lots of liberties, came back. She loved it. We went in the studio for two months and came up with probably the best group of songs that were co-written that we’ve done in years. So we are going to continue working on a new album and (my) solo stuff will probably take a back seat for another year or so.”


He went on to say the still unfinished album "would be a beautiful way to kind of wrap up this last act."

Although Lindsey Buckingham is marking his 40th anniversary of joining Fleetwood Mac, at 65, he still feels like he's at the top of his game: “A lot of the idea of (laughs) being in a rock n’ roll band and getting to be one of, sort of the people who’s been around for a while, y’know, you can manage that equation any number of ways. Y’know, it’s hard for me to sort of. . . I feel the same physically as I did 25 years ago. I think I’m mentally, somewhat in arrested (laughs) development - y’know, in a good way, I hope!”


Out now is Lindsey Buckingham's first ever solo live album -- Lindsey Buckingham: One Man Show. The set was recorded on September 1st, 2012 in Des Moines, Iowa at Hoyt Sherman Place, and chronicled the set Buckingham has playing on his last solo tour.

The album features Buckingham tapping into his solo work with tracks like "Go Insane" and "Trouble," Fleetwood Mac with "I'm So Afraid," and "Go Your Own Way" -- and even a rare dip into the Buckingham Nicks catalogue with "Stephanie."