Never underestimate the power of the Mac.

Three songs into Monday night’s set at Toyota Center, Stevie Nicks promised the crowd she would “get this party started!” Until then, Fleetwood Mac had been pleasing and mostly polite: anthemic kickoff “The Chain,” “You Make Loving Fun,” “Dreams” shifted to a lower key. 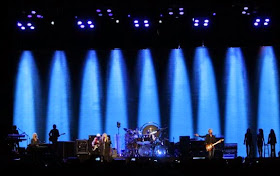 But something kicked into gear with “Second Hand News.” Lindsey Buckingham ripped into the song, all wild eyes and stomping feet. It reverberated through the sold-out crowd and energized Nicks’ take on “Rhiannon.” The party had indeed started.

Christine McVie, who rejoined the band after a 15-year absence, was still soulful and sweet on “Everywhere” and “Little Lies,” which both benefited from punchy arrangements; and oft-covered set closer “Songbird.” 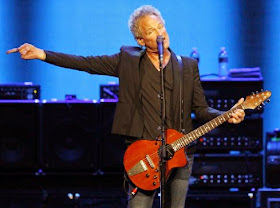 The enduring allure of Fleetwood Mac has been the story behind the music. The core unit — Buckingham, Nicks, John McVie, Christine McVie and Mick Fleetwood – has continued to thrive both in spite and because of its tempestuous history. Life has informed music and vice versa.

Buckingham played up the sentiment, declaring that the band’s success is in its ability “to continue to prevail through the good times and the bad.” He called Christine McVie’s reappearance “the beginning of a poetic, a profound and a beautiful new chapter.”

For now, though, it was about the music. “Tusk” still brings the marching-band thunder. Buckingham indulged himself, as always, during a solo “Big Love” and several rousing crowd-pleasing guitar solos. Christine McVie ably steered the “Say You Love Me” harmonies. Nicks cast an alluring spell during “Sisters of the Moon,” an extended “Gypsy” (complete with shimmering shawl) and “Seven Wonders.” She performed the song recently on “American Horror Story” (and thanked the show for taking it to a new audience).

And, yes, something sweet and magical still happens when Nicks’ croons about getting older and snow-covered hills during “Landslide.” The entire venue seemed to sigh in unison.

“Are you listening over there?” she asked him before twirling through the song.

And, yes, something sweet and magical still happens when Nicks' croons about getting older and snow-covered hills during "Landslide." The entire venue seemed to sigh in unison.

Long intros and instrumental breaks bogged down the show’s second-half a bit. But the padding was worth trudging through to hear “Go Your Own Way,” “Don’t Stop” and Nicks’ grand, gorgeous reading of “Silver Springs.”

THE CHAIN
YOU MAKE LOVING FUN