Charlotte got their songbird back... but didn't get their "Songbird".

The final song of the night (Songbird) wasn't performed last night. It appears that Christine had hurt one of her hands and was seen with it bandaged.  Hopefully it's a minor issue and the song returns to the set for the next show.

Stevie dedicated "Landslide" to those that marched from Selma to Montgomery 50 years ago yesterday. 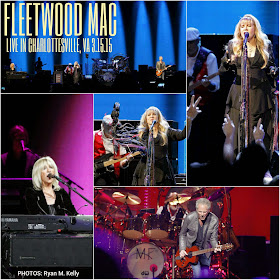 Although it was, as Stevie Nicks noted early on, the band’s 62nd show with Christine McVie since reuniting for the On With the Show Tour in September, it was McVie’s first Charlotte show since leaving the band in 1998.

The warm response she and Mac received as Lindsey Buckingham hit the first note of “The Chain” was electric. The crowd roared with excitement, and I wondered how McVie could have walked away from such adulation presumably forever – Nicks has stated she thought McVie would never return to the band.

Good thing she did. Fleetwood Mac was whole again and able to perform McVie-showcasing tunes like “You Make Loving Fun, “Everywhere,” “Say You Love Me” and “Over My Head.” McVie, whose voice has remained intact, made the addition of songs like “Little Lies” possible, filled out “Don’t Stop” and beefed up harmonies elsewhere.

Nicks seemed in stronger voice Saturday than in 2013. She hasn’t bothered to reach for the high notes on “Dreams” and “Rhiannon” for years, but she was in fine form on “Seven Wonders.” She thanked “American Horror Story: Coven” for bringing back the song (Nicks sang it on the show).

She also soared on “Gypsy” and “Landslide.” She dedicated the latter to the people who marched from Selma on the 50th anniversary of the historic march and talked about the impact of that moment. She and Buckingham were 15 and 16 years old. She later told a story of how they met and their first band while introducing “Gypsy.”

While the entire band seemed reinvigorated with the always subdued John McVie’s bass lines punching up the backbeat, Buckingham and Mick Fleetwood remained the band’s fire.

Buckingham, who stole the 2013 show, was again a tireless showman who seemed to revel in the spotlight, bouncing his guitar against his knee, hopping on one leg, and goofing with fans in front of him. He, of course, demonstrated his six-string dexterity on “Big Love” and “Never Going Back Again.”

Fleetwood’s atypical drum solo, which occurred midway through the encore’s “World Turning,” found him verbally rallying the crowd while taking in their feedback with eyes closed before the solo escalated against a loop of his verbal antics.

Although Mac is known best as a mainstream pop-rock band, “Tusk,” “Gold Dust Woman” and “I’m So Afraid” allowed the group to stretch into psychedelic jam territory with Nicks bucking wildly across the stage in her platforms during “Gold Dust’s” extended jam.

Of course with a collective career – not to mention individual ones – that extends over 40 years, there were omissions. The woman shouting “Hold Me’s” request was unmet. Gone were Nicks’ and Buckingham’s solo hits.

Instead the focus was on Fleetwood Mac’s history from the first album the lineup made together in 1975 to its 1997 hit “Silver Springs,” which Nicks had originally written for “Rumours.”

The aging pop group (from McVie, who looks incredible at 71 to Buckingham, the baby of the band at 65) relied on the support of two backing musicians, Neale Heywood and Brett Tuggle and three vocalists, including Lori Nicks and Sharon Celani, who have been with Nicks since her first solo album.

If it turns out that Fleetwood Mac decides it’s never going back (on tour) again after this, it will have left fans satisfied. But the members seem to be enjoying it and one another so much I doubt that will be the case.