Second show where "Songbird" was left out of the set at the end. Christine still dealing with a hand issue. 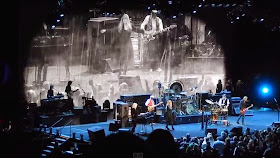 Rock and roll royalty graced Knoxville on Sunday night. Since forming in 1967, Fleetwood Mac has sold over 100 million records, received Grammy and Brit awards and has been inducted into the Rock and Roll Hall of Fame.  Despite lineup changes and temporary break ups, they are still going strong.  The current tour welcomes back Christine McVie after a 16-year hiatus. Mick Fleetwood said, “our songbird has returned and we are now complete.”  The reunion restores the lineup of their heyday in the late 70’s and 80’s.  Stevie Nicks (vocals), Lindsey Buckingham (guitar), Mick Fleetwood (drums) and, John McVie (bass), complete the group. The current world tour “On with the Show” includes 106 shows across the US and UK.

Continue to the full review - with photo gallery

LANDSLIDE (Dedicated to the Smoky Mountains and the people of Knoxville)