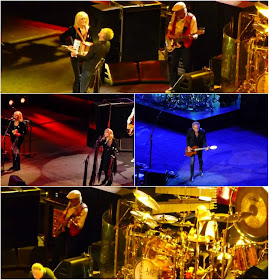 Fleetwood Mac Rock Orlando With ‘On With The Show’ Tour


It’s only been six years since Fleetwood Mac last paid a visit to Orlando, but they were missing


something when they played the now demolished Amway Center in April of 2009. Original bandmate Christine McVie was absent, leaving the sole female presence for the show to fall on the capable shoulders of Stevie Nicks. And while that’s not a bad thing, particularly for the many fans of Nicks, it left a significant number of songs off the setlist.

All that has been remedied with the current On With The Show tour, which played Orlando’s Amway Center last night. All of the hits were there, from Christine’s taking the lead on “You Make Loving Fun” to the witchy ways of Stevie on “Rhiannon” and “Gold Dust Woman.”

While McVie’s voice seemed to have some difficulty, particularly in the upper registers, Nicks was in amazing voice, seemingly finally figuring out how to adeptly mask those upper notes which she may now be missing. But the real star of the show was guitarist, and former Nicks paramour Lindsey Buckingham. Buckingham is a true rock star, giving his all on every number where he took the lead. As drummer Mick Fleetwood noted at the end, Buckingham barely left the stage for the entire show which clocked in at just under three hours.

An amazing thing about attending concerts in this day and age are the number of people who obviously fancy themselves amateur photographers and videographers. With so many of them out there, and the shareability of their results so simple, it makes it even more fulfilling to just sit back, live in the moment, and enjoy the show to its fullest extent. Sooooo…here are some of the show’s best Amway Center moments as captured by local YouTubers.

The show opened with “The Chain,” one of the most iconic anthems from the Rumours album.

Setlist and more from the show at 105.9 SunnyFM.


THE CHAIN
SISTERS OF THE MOON
TUSK
EVERYWHERE