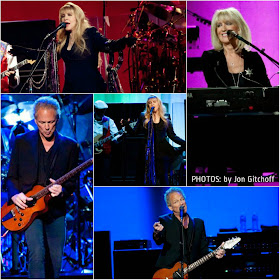 It only makes sense Fleetwood Mac would open its sold-out concert at Scottrade Center Friday night with “The Chain,” featuring the key lyric: “Chain keep us together.”

After years full of ups and downs, as singer and guitarist Lindsey Buckingham pointed out, “we’ve grown and prevailed through the good and the bad.”

And these days the band is prevailing with returning keyboardist and singer Christine McVie, making this late-career run of the band, on its “On With the Show” tour, a must-see (16,000 fans attended at Scottrade Center). She’d been out of the fold for 16 years.

Christine McVie’s presence was welcome, as evidenced by the applause she got with the opening line of “You Make Loving Fun” (missing from the band’s 2009 show at Scottrade Center), allowing songs such as that and “Everywhere” and “Little Lies” into the setlist again.

Buckingham told the crowd McVie’s return presented a “profound, prolific and new chapter in the story of this band, Fleetwood Mac,” while Nicks reveled in girl power being restored to the band.

McVie did come off second fiddle to Buckingham and Nicks, undeniably and not surprisingly. But her presence was an important one, and she held up her role well.

Over a lean and briskly moving two hours-plus, the great Fleetwood Mac offered fans exactly what they wanted, which was nothing but a barrage of hits including “Go Your Own Way,” “Don’t Stop” and “Never Going Back Again,” performed to perfection with perhaps a few backstories thrown in — including a lengthy one from Nicks about the day she received a call from McVie saying she wanted to come back.

“Dreams,” “Second Hand News,” “Rhiannon” and “Everywhere” kept the show’s early going moving, and the pace never let up. It’s to the band’s credit it could afford to stack hits throughout the entire set without wedging in any filler.

“Tusk” was the percussive delight it always is; “Big Love” was a quick reminder of the power of a solo Buckingham on guitar; and Nicks brought her requisite twirl to “Gypsy.” The psychedelic
finish to “Gold Dust Woman” was appropriately trippy, while Fleetwood on drums is a whole other trip. He was like a beast trying to fight its way out of its cage.

During a middle portion of the show focusing on Nicks and Buckingham, Nicks had a quick emotional moment during the still-exquisite “Landslide” and acknowledged it at song's end.

Fleetwood addressed the crowd at the end of the night, after encore songs “World Turning,” “Don’t Stop” and “Silver Springs,” telling everyone to love each other in this crazy world, and concluded with: “Remember, the Mac is definitely back.”

Truer words couldn’t have been spoken.