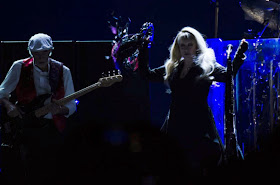 If Fleetwood Mac wanted to phone in last night’s show at the Bridgestone Arena, they totally could have. The crowd — predictably mostly middle-aged, mostly white — was the kind of crowd that would dance to anything. Before the band even took the stage, folks around us grooved to the anonymous instrumental house music, a sure sign that these people are ready to boogie to whatever is put in front of them. But Fleetwood Mac obviously has no interest in just getting through. This is a band that has persevered through decades of adversity; this is not a band who takes shortcuts.

From opening number “The Chain,” Stevie Nicks, Lindsey Buckingham, Mick Fleetwood, John McVie and, back after a 16-year absence, Christine McVie all flawlessly and seemingly effortlessly delivered the goods as though they were holding their proverbial middle fingers in the air and defying any onlooker to even contemplate uttering the phrase, “They still rock ... for a bunch of old folks.”

But it wasn’t just a collection of well-performed hits, played as though they were trapped in an unforgiving casino circuit driven by fans who can’t let go of the past. As a full band, Fleetwood Mac is incredible, yes, but they’re also such iconic musicians in their own right, and the remarkable thing about Wednesday night’s performance was that everyone had his or her own moment to shine, with obvious respect and support from their bandmates.