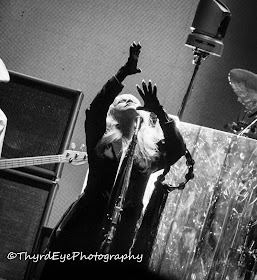 
Fleetwood Mac, one of the greatest selling acts of all time, brought their most successful lineup back to Scottrade Center for the first time in 18 years on Friday for a stop on their “On With the Show Tour” and the resulting show was a trip down memory lane.

Longtime vocalist/keyboardist Christine McVie had left the band after their successful 1997/98 “The Dance Tour” (Which played at the then named Kiel Center on November 17, 1997) to retire from touring.

While there have been many incarnations of Fleetwood Mac in their 47 year history their most popular and well-known has been with the lineup that was featured Friday night of McVie along with vocalist Stevie Nicks, vocalist/guitarist Lindsey Buckingham, bassist John McVie and Founding member Mick Fleetwood on drums.

Each of the band members glowed about McVie’s return and noted that it was her 70th show back with them, bringing the band back to where they are their best.


“If you would have asked me ten years ago, I never thought I’d be doing this,” Christine McVie announced to the Sprint Center audience last night, before she began “Everywhere,” her first lead song of the evening.

Indeed, McVie was not alone in that sentiment. The majority of Fleetwood Mac’s throbbing audience – which very nearly sold out the Sprint – had likely never dared to hope the day would come that McVie would once again be taking her place at the keyboard on stage with her former bandmates. After a 16-year absence, this joyful reunion is part of what made last night’s two-and-a-half hour show so special.

The rest was pure nostalgia, with a 22-song setlist packed with fan favorites performed with the kind of enthusiasm artists generally reserve for their freshest material. Lindsey Buckingham and Stevie Nicks were in fine form, the former acting as both a tireless shredder – his agile handiwork was displayed multiple times on the large screen behind the band – and gooey speechmaker.