Stevie accepted the USO-Metro Achievement award for her work visiting combat-wounded service members as part of USO-Metro’s celebrity handshake tours. She visited Walter Reed Army Medical Center and donated hundreds of iPods filled with music over a five year period to those recovering at Walter Reed and Bethesda National Naval Medical Center. Nicks was so moved by her hospital visits that she wrote the song “Soldier’s Angel” which was released as a single in 2011 and appears on her album “In Your Dreams.” 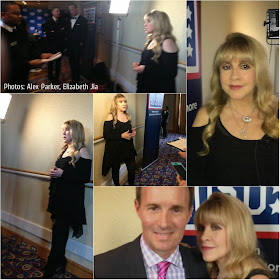