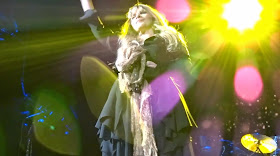 A few songs into Fleetwood Mac’s concert at the MGM Grand Garden Arena on Saturday, singer Stevie Nicks noted that it was the 78th show on the band’s current tour with returned singer/keyboardist Christine McVie. Having McVie back after a 16-year hiatus seems to have reinvigorated the group, and they played with the enthusiasm of the first show on the tour, along with the confidence of experienced veterans.