Fleetwood Mac adds another chapter to their storybook with a career-spanning show at the Forum
by KELSEY HENG
Buzzbandsla.com
Photos by Kelsey Heng 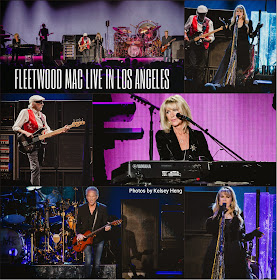 Following up last November’s stop in Los Angeles, iconic rockers Fleetwood Mac returned to continue their “On With The Show” tour. On Friday night, the Forum celebrated the idolized lineup that created “Rumours,” one of the era’s greatest albums and cemented the band’s place in history.

With a 16-year retirement now behind her, Christine McVie has returned to the band for a reunion worth witnessing. Her sweeping alto harmonies and beloved love songs were a glaring missing piece for so many recent years. Now with her return, Lindsey Buckingham cheerfully declared this night a “circular karmic moment and new chapter in the story of this family.” - See more at:

And it’s a family with plenty of story — one that has been anything but hidden to the public eye. Buckingham paused the show to emphasize that fact, saying, “We are a group of individuals and a band that has seen its ups and downs, but that is what makes us who we are. And we have been able to prevail through the good and the bad.”

Full Review with Photos at Buzzbandsla.com