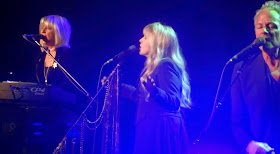 Fleetwood Mac must really love Vancouver. The Anglo-American pop greats played Rogers Arena less than five months ago, on November 18, before returning for last night's gig at the same venue.

Apparently the feeling is mutual, because hordes of Vancouverites were willing to drop $199 (plus service charges and fees) for the best seats at the quintet's latest appearance. Who knew that Christine McVie had that much drawing power?

Last year saw the return of keyboardist-vocalist McVie to the concert stage, reuniting her with singer Stevie Nicks, guitarist-vocalist Lindsey Buckingham, drummer Mick Fleetwood, and bassist/ex-hubby John McVie. That's the same lineup that ruled the charts and airwaves in the seventies during its Rumours-era heyday.


Getting McVie back in the group for its current On With the Show tour meant that it could perform more of the songs she wrote and sang, of course, and last night that resulted in tunes like "Over My Head" and "Say You Love Me" (from 1975's Fleetwood Mac) and "Little Lies" and "Everywhere" (from 1987's Tango in the Night) making the setlist.

McVie--the oldest member of the band at 71--sounded fine on those numbers, but it didn't hurt that she was supported by a trio of youthful backing vocalists. The group also benefited from an extra keyboardist and an extra guitarist. Hey, when you charge that much for tickets you can afford some hired hands.

And you can also invest a few bucks into getting one helluva drum sound. I don't think I've ever heard such a powerful bass-drum noise in a hockey rink as that booming out of Mick Fleetwood's kit. From the opening track, "The Chain", to the first encore, "World Turning", Fleetwood was a monster on the skins. His extended solo on the latter track turned out to be far more entertaining than what you'd expect from an old guy hollering and hitting things.

The show's visuals were most impressive too. The massive video screen behind the 10 performers kept your attention, whether displaying footage of the USC Trojans' marching band during "Tusk", a huge moon changing colours on "Sisters of the Moon", or a beautiful lady dancing underwater on "Gold Dust Woman".

The last time the band played Vancouver without Christine McVie, in May of 2013, the setlist included the Stevie Nicks solo hit "Stand Back", but this time around there were no selections from outside the Fleetwood Mac catalogue. And 14 of the 22 songs played were taken from the multiplatinum Fleetwood Mac and Rumours discs. There was none of that, "And here's a track from our latest album!" nonsense. Mac's latest album came out twelve years ago, anyway.

The biggest highlight of the night may have been Buckingham's solo performance of "Big Love", which showcased his crazy-ass fingerpicking style and ultra-expressive vocals. Mind you, he did reach similarly dramatic heights seven songs later on the heavy (by Mac standards) "I'm So Afraid", which saw him prowling the stage like a man possessed before unleashing a gonzo solo right out of the Ultimate Guitar Hero Playbook.