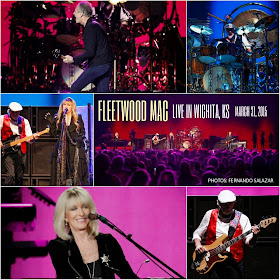 The whole Fleetwood Mac lineup was at Intrust Bank Arena on Tuesday night to perform its library of hits for 12,000 appreciative fans.

But the member that original musicians Stevie Nicks, Lindsey Buckingham, John McVie and Mick Fleetwood seemed to appreciate most was songbird Christine McVie, who has just rejoined the group after a 16-year absence.

Lead singer Nicks, noting early in the show that Wichita was the band’s 72nd stop on its tour that started last year, said that at the beginning of the tour, she used to welcome Christine McVie back at the top of each show.

“But now that we’re on show number 72, I think we can safely say she’s back,” Nicks said as the crowd cheered wildly.

The concert, a 22-song tour through the band’s almost 50-year career, showcased many of the songs the members wrote about their drama, fights and love triangles.

Now all in their 60s and 70s, the members seemed in sync and warm toward each other, a musical reminder that time heals.

“I think it’s safe to say that we are a band and a group of individuals who have seen its share of ups and downs, all, I’m afraid, very well-documented,” Buckingham said from the stage, adding that the group has also been able to “prevail through the good and the bad.”

The band opened with its 1977 hit “The Chain” from its album “Rumours.” The house lights went down, and after several anticipation-building minutes, the shadow of a woman in flowing clothes appeared.

When the lights went up, it was Nicks, dressed in her signature fringe, holding a scarf-laden tambourine with Buckingham to her left on guitar, Christine McVie to her right on keyboards and vocals, John McVie behind her on bass and Mick Fleetwood behind her with his drum set – bearded, ponytailed and energetic as ever.

The crowd members, most in their 30s through 60s, included some who stubbornly remained in their seats and others who stubbornly stood and danced, oblivious to who was behind them.

Highlights of the show included Nicks leading the group through two of its biggest hits, “Dreams” and “Rhiannon.” Her recognizable growl was still firmly intact, though she didn’t even attempt the high notes from days gone by on either song.

Christine McVie spoke a few times also, her velvet British accent adding some class to the proceedings as she introduced some of her songs, including the 1980s hits “Everywhere” and “Little Lies.”(Noticeably absent from the set list: “Songbird,” her big song from “Rumours.”)

When it was time for “Landslide,” the Nicks-penned hit from 1975, only one-time couple Nicks and Buckingham were on stage. Nicks dedicated the song to “girl power” and to two women in the Wichita crowd she said she had learned just before the show were distant relatives. In the pause before the final refrain, she and Buckingham briefly held hands, and she said something in his ear. He nodded in agreement.

Buckingham then launched into a solo, drawn-out version of “Never Going Back Again.” At the end, Nicks reappeared to back him up.

The group also performed hits “Gypsy,” “Go Your Own Way” and “Gold Dust.”

The encore was “World Turning,” “Don’t Stop” and “Silver Springs.”