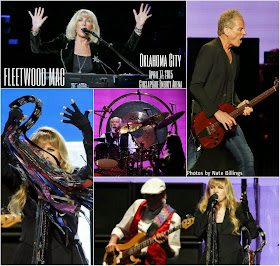 Early highlight: Even if it isn’t your favorite Fleetwood Mac song (the eerily extended version of “Gold Dust Woman” and crazily energetic version of “Secondhand News” were more my speed), there’s just something about a big fan sing-along on “Go Your Own Way” that makes it the instant, undeniable highlight of any Fleetwood Mac show.

Reviewer’s take: “Our ‘Songbird’ has returned,” drummer and bandleader Mick Fleetwood declared, and he was right in declaring that Christine McVie completed the lineup. Not only did she round out the trademark three-part harmonies with her smoky voice, she also brought a rightness and energy that galvanized the Rock and Roll Hall of Famers.

"The Chain" is at last mended, and unbroken, it's as strong as ever.

Fleetwood Mac made its delayed yet triumphant return to Oklahoma City Friday night with its full, five-star iconic lineup, including singer/keyboardist Christine McVie, whose significance in the band becomes even more apparent once you witness live the way she both energizes and eases her cohorts.

Or as drummer and bandleader Mick Fleetwood put it, "Yet again, it's my pleasure to really acknowledge how unbelievably great it is to know this lady sharing our stage and making us all feel very complete. Our 'Songbird' has returned."

An adoring sellout crowd of about 13,000 fans flocked to Chesapeake Arena Friday night to welcome the full Mac attack, even if it was a full month later than initially planned. The OKC stop on the Rock and Roll Hall of Fame outfit's "On with the Show Tour" was postponed back in March due to an illness in the band.

"We're a group of individuals in a band that I think it's fair to say we've seen our ups and downs, and it's all well-documented. I think it's made us what we are," he added, pausing while the crowd's supportive shouts briefly drowned out his distinctive voice.

"What doesn't kill you makes you stronger. ... But in this magical, circular, karmic moment with the return of the beautiful Christine, I think it's safe to say we begin a profound, poetic and prolific new chapter in this band."

Even on the 80th show of the tour - McVie officially rejoined the band on the road last fall after 16 years in retirement - the smoky-voiced songbird's bandmates couldn't stop talking about her return. In her mystical New Agey way, fellow singer Stevie Nicks thanked the fans for helping the universe conspire to bring McVie back to the band by putting their desire for the reunion out into the cosmos.

"Thank you everybody for bringing my girl back and the force of nature Stevie and Chris thing I love and she loves," Nicks said. "Thank you for staying with us for 40 years."

Even with all that, it's impossible to overstate the galvanizing effect McVie's return had on Fleetwood Mac Friday night. Although she's my personal favorite, the English singer-songwriter and her ex-husband, bassist John McVie, have long been the quiet strength of Fleetwood Mac, unobtrusively carrying on while Buckingham, Nicks and Fleetwood always seemed in a three-way run-off for the title of the quirkiest, most outsized personality in the band, if not all of rock 'n' roll.

But comparing Friday night's show to the Fleetwood Mac concert I reviewed in 2009 at Tulsa's BOK Center, there's no comparison - and no doubt that Christine McVie is the linchpin of Fleetwood Mac. Don't get me wrong, the band performed admirably enough as a foursome, but her absence left a hole that the band — especially fellow vocalists Buckingham and Nicks — obviously struggled to fill at times.

On Friday night, though, there was no struggle, only the pure rock 'n' roll joy of a band finally back in balance: Stevie Nicks may be the one at center stage, but Christine McVie serenely centers the thunderous rhythm section of Fleetwood and John McVie and the stormy musical chemistry of ex-lovers Buckingham and Nicks.

The difference was undeniable from the opening number, the rumbling anthem "The Chain," which showcases all the band members' strengths, including the trademark three-part harmonies of Buckingham, Nicks and Christine McVie. With the latter's return, the band's cavernous catalog of hits gets even deeper, and the quintet immediately linked "The Chain" to one of her biggest hits, "You Make Loving Fun," a delightful showcase for her bluesy voice and piano.

From there, the 2 1/2-hour show, the band's first in the Oklahoma City arena since 2003, became just what a Fleetwood Mac concert ought to be: a round robin of Buckingham, Nicks and Christine McVie signature hits, with each eagerly backing up the other during their spotlight songs.

As usual, Buckingham was a tight coil of energy springing into action when he sets his fleet fingers to an electric or acoustic guitar. Finger-picking like a demon and crooning - and more than occasionally yowling - like a wounded lover, he brought his usual dynamism to "Second Hand News," "I Know I'm Not Wrong" and "Tusk," although it was seeing Christine McVie strap on her accordion that made that last one a highlight for me.

Buckingham literally took the darkened stage solo for his flamenco-style acoustic version of "Big Love," and he didn't let the snapping of a guitar string on the first solo faze him, simply starting the song over without losing any of his intensity.

He and Nicks harkened back to their days of a duo when she joined him for heart-wrecking acoustic renditions of her "Landslide" and his "Never Going Back Again." The former couple provided the show's powerful one-two punch with Nicks' eerily extended version of "Gold Dust Woman," her dusky howls punctuated by her possessed-marionette dance moves and John McVie's sternum-rattling bass line, and Buckingham's expanded electric guitar lament "I'm So Afraid," the ominous overtones intensified by the lowering of the lighting rigs to right above Fleetwood's drum kit.

Gliding across the massive largely unadorned stage in her black ruffled skirt and fringed shawls, with both her tambourine and microphone stand draped in fluttering streamers, Nicks throatily showed off her witchy ways and indisputable stage presence on "Rhiannon," "Sisters of the Moon" and "Dreams." An engaging storyteller, she shared the background of the autobiographical "Gypsy," a childhood favorite of mine that probably brought back as many memories for me as it did for the songstress in that magical moment when she began twirling across the stage.

Still slim and elegant in her black pants and black velvet jacket, Christine McVie proved that her long retirement had not diminished her warm and precise vocals - who else could deliver the line "my friends say I'm acting peculiarly" on the effervescent "Everywhere," which she dedicated to the fans? - as she buoyed the crowd with "Say You Love Me," "Over My Head" and "Little Lies."

"We're nearing the end of this tour, and it's hard to believe I'm standing on this stage," said Christine McVie midway through the penultimate show on the North American leg of the tour, which heads to England next month.

Naturally, the band ended its set with the fan favorite "Go Your Own Way," which always turns into such an enthusiastic sing-along that is an undeniable highlight of any Fleetwood Mac show.

Of course, no Fleetwood Mac show would be complete without one of those hallmark maniacal Mick Fleetwood drum solos, and the encore started with the bearded and ponytailed bandleader leading the audience through a pounding primal scream session in the midst of the band's bluesy classic "World Turning."

He waxed eloquently about each of his bandmates as well as the group's skilled backup singers and musicians before launching the Mac attack into another crowd-pleasing sing-along number, "Don't Stop," which Christine McVie matching her barroom-style keyboard to Buckingham’s spirited guitar.

The only thing that would have made Christine McVie's return better would have been her performing her signature ode, "Songbird," the band's traditional closing number. However, during her retirement years, Nicks' beautiful ballad "Silver Springs" became the group's usual closer, and so it was the Gypsy and not the Songbird that used her soulful voice to bid farewell to the Oklahoma City crowd. (Previous reviews indicate that McVie has sometimes performed “Songbird” as a second encore on this tour; alas, that’s not what happened in OKC Friday night, perhaps because the first encore didn’t end until 10:45 p.m.)

Still, it was the Songbird that made Fleetwood Mac soar to its loftiest heights Friday night.