Fleetwood Mac are both brilliant and loveable, which is some combination 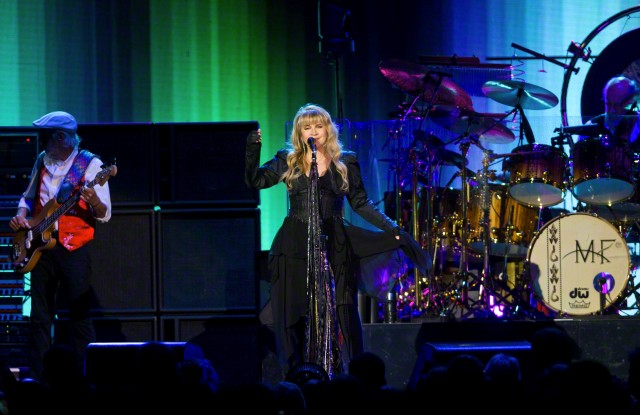 The O2 would be a sterile venue to host a conference of anti-bacterial spray manufacturers, let alone a concert of one of the world's great rock bands, and the clientele were suitably hard to pin down. It was strange to go to a gig with no discernable tribes, unless fans of a carvery on a Sunday constitutes a tribe. It was like being on a Ryanair flight with 20,000 people.

Why do I hate gigs? Even when I was a teenager and went to a gig a week, I hated gigs. For starters, I experience enochlophobia (look it up). More importantly, I have always been so precious about music that it always seemed a particular perverse cruelty to have my experiences ruined by inevitable meatheads, who would always (and I mean, always) end up standing or sitting next to, behind, or in front of me. Since I refuse to enjoy myself, God punishes me by surrounding me with people who do.

And lo, George the meathead magnet strikes again. Behind me were five friends, who informed me that they had come all the way from Bristol to see their favourite band - and then talked through every song. It was all going exactly as I had expected. It was a shame that the sound at the O2 is so muffled and rough. It really is a music venue for people who don't like music. I would have preferred a bit more volume and clarity, not only to drown out my paralytic-clown neighbours, but because I really wanted to listen to the band.


Fleetwood Mac are both brilliant and loveable, which is some combination. I overheard one woman saying, "I'm going to cry when they come on, I can feel it." They opened with "The Chain", a surefire way to get everyone on board, and its finale still resonates with intricate vocal layering that evokes the choir of an Orthodox church. From here they ran through their greatest hits, which was just fine by everyone, including me. It is worth noting that this is a band with three distinct but complementary songwriters of the highest calibre. There are very few other bands who can boast of such a musical arsenal and their songbook reflects this strength, rotating from the enthralling, edgy neurosis of Lindsey Buckingham to the dark femininity of Stevie Nicks followed by the pure light of Christine McVie's perfect pop.

They have been buoyed by the return of Christine McVie, who restores the band to its classic Seventies and Eighties lineup (yes, I know it's not the original lineup). Stevie Nicks appeared to be genuinely delighted to have McVie back and this love was echoed in the reaction of the audience to McVie's songs, which got the loudest and warmest applause. McVie is an extraordinary woman. She looks like your mum's best friend - Auntie Christine who works on the lingerie counter at M&S - but she has written some titanic songs: "You Make Loving Fun", "Say That You Love Me", "Little Lies". She is consistently underappreciated.

Buckingham's highlight (his guitar playing borders on superhuman at times) was his solo acoustic version of "Big Love", a song which gets more unsettling, mysterious and enjoyable as it ages. He was clearly the hero of the one of my new friends, who was so drunk that in between informing those around him Buckingham was "a f***ing legend", he forgot the legend's name and began shouting "Lesley! Lesley!"

My enjoyment of the subtle, emotionally wrought harmonies of "Rhiannon" was impaired somewhat by the girl in the seat behind me yelling "Sit the f*** down" at her friends over and over and over again. She trumped this during Lesley, sorry Lindsey, Buckingham's slowed-down version of "Never Going Back Again", during which she loudly conceded, "I'm so drunk I can't see," as she kicked the back of chair like a toddler in economy class.

Buckingham made a speech about the band's well-documented "ups and downs" and proclaimed a new "profound and prolific" era for the band. That was the herald for the dead hand of "I Know I'm Not Wrong", which, since no one recognised or wanted to hear, meant hundreds of punters headed for the toilets and the bars. It was as if Fleetwood Mac had become their own support band nobody cared about. But I don't think they noticed and it didn't matter as the hits soon started rolling again.

Buckingham and Nicks sang "Happy Birthday" to Mick Fleetwood, whose enjoyment and drumming chops are clearly undimmed. He and John McVie - recovering from cancer - remain reassuringly indomitable and tight. As John McVie said of his musical spouse of 50 years to Mojo, "Mick will go on until they put him up against the wall and shoot him."

And so, after most of Rumours, half of Tango In The Night  and the title song from Tusk (one of the highlights and the only occasion the visuals really helped the show - with a trippy rehash of the original "Tusk" video at Dodger Stadium in LA), we got to the money shot: "Go Your Own Way" and "Don't Stop". Nicks returned for the finale wearing a black top hat that reminded me a bit of the hitcher from The Mighty Boosh (which would have pleased Mac fan Noel Fielding) and the band proceeded to give the crowd what they wanted.

About a third of the audience stood up to dance. More still jiggled in their seats. I doubt if there have been that many people with so little natural rhythm gathered in one place since the world championship bowls final at Potters Leisure Resort in Hopton-on-Sea. McVie capped her triumphant evening with a grand piano and "Songbird". My new chums were suitably moved. But it was hard not to be.

As I said before: Love Fleetwood Mac. Hate gigs. Deep down I knew the uncomfortable truth of this enterprise, which was that the meatheads were the unfortunate ones for having to sit behind me, rather than the other way round. "This has got to be one of the top three nights of my life, easy," slurred one of them. God had spoken and it was my fault if I didn't listen. Long live Fleetwood Mac and their fans.
Nickslive at Tuesday, June 30, 2015
Share