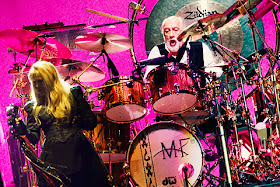 The news has come as even more of a blow as it is Christine McVie's first tour in 16 years with the band.

Promoters announced earlier today that their On With The Show tour could not go on after all due to a band member falling ill.

It is the second date the 60s and 70s rock legends have had to call off on the UK leg of their tour after dropping out of their Birmingham gig at the last minute on Tuesday.

But while the Genting Arena show has been rescheduled for July 7, it is understood promoters have failed to find another Manchester date to fit the band’s tour schedule.

The news is especially disappointing as it is Christine McVie’s first tour in 16 years with ex-husband John McVie and bandmates Mick Fleetwood, Stevie Nicks and Lindsey Buckingham.

Christine is the songwriter and voice behind some of the band’s most enduring hits, including Don’t Stop, Little Lies and You Make Loving Fun.

The band’s second show in Manchester on July 1 is set to go ahead as planned but is already sold out, leaving fans with no option than to pay ramped-up resale prices or barter with touts to get their hands on tickets.

Among those hit hardest by the news was Hannah Owen, who wrote on Facebook: “Absolutely gutting. My dear dad bought tickets for my mum and him to go for Christmas. He has sadly passed away and poor mum was so keen to go as it’s what he wanted.

“No reschedule and no tickets left for 1st July show. Such a shame.”

Fans had been due to travel from far and wide for the Manchester gig and some had already arrived in the city before hearing the news.

Among them was Jeroen van Drunen, who flew in from Hungary yesterday just to see them perform.

Fran Haselden had also planned to travel across England for the show. She wrote on the MEN’s website: “I’m so gutted. I’ve been waiting for this since the tickets were released with anticipation.

“We were heading up from the south east this afternoon. We’ve lost a day of pay each to be able to drive up, and it was our last chance. I am so gutted, I cannot believe they are not rescheduling it.”

Amongst the disappointment was also sympathy and concern for the afflicted band member, whose identity has not been revealed.

Smalley (@nicksmallshaw) tweeted: “Hoping for a swift recovery, but no rescheduled gig is devastating. Can’t see me ever getting tickets again.”

A few fans remained upbeat enough to see the punny side, with some questioning whether it was just rumours and others hoping the news was ‘lies, sweet little lies’. If only...
Nickslive at Friday, June 12, 2015
Share