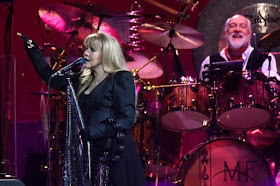 Birmingham marked a homecoming of sorts for Fleetwood Mac as they played their 88th date on a world tour that started out in the US in September 2014.

This tour sees the welcome return of singer-songwriter and keyboard player Christine McVie, the former Bearwood native making a big deal of the fact she was back in her old stomping ground.

"Well, hello Birmingham,"she said, as she stepped up to the mic to sing the smash hit Everywhere.

"This is my old stomping ground, many many years ago I used to go to art college here.

"It's fantastic to be back playing with Stevie, John, Lindsey and Mick."

Clearly the band really are firing on all cylinders with her back on board.

Arguably that synergy is as much about the musical bonds that hold them together as the broken relationships that drove them apart in their turbulent history - some which was alluded to by Buckingham during one of his many song introductions.

This Genting gig did not disappoint with the hits coming thick and fast, from the Formula One anthem The Chain, which got the evening off to a rousing start, John McVie's thundering baseline almost shaking the arena walls.

You Make Loving Fun, Dreams, Second Hand News and Rhiannon were next, the last of these demonstrating Nicks' voice is as rich and warm as ever.

I Know I'm Not Wrong, Tusk, Sisters of the Moon and Say You Love Me followed before an acoustic interlude featuring Nicks and Buckingham, with blistering versions of Big Love, Landslide and Never Going Back Again.

Next it was Gypsy, McVie's voice shining on Little Lies, Gold Dust Woman and I'm So Afraid featured some fine musicianship before Buckingham virtually raised the roof with Go Your Own Way.

That was the final song two hours in but it wasn't long before the return of The Mac for a singalong encore performance of World Turning featuring the requisite Mick Fleetwood drum solo and Don't Stop.

Despite their decades in the business and those previous 87 tour dates, Fleetwood Mac have still very much got it.

Will this be their last tour as some are saying? Who knows - but let's hope not.
Nickslive at Thursday, June 11, 2015
Share