On With The Show was merely a tagline last week for Fleetwood Mac when they had to cancel tour dates due to illness. Although they played the Isle of Wight festival at the weekend, Scottish fans were still on tenterhooks last night to see if the first of two nights in Glasgow would go ahead. It did - and, if it was a celebration of anyone, the members of Fleetwood Mac said this show was a "welcome back" to Christine McVie, who did not play the Hydro along with the rest of the band two years ago on their world tour. 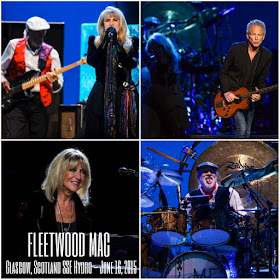 After a warm greeting from the capacity crowd, You Make Loving Fun from seminal 1977 album Rumours highlighted the venue's tendency to challenge vocal clarity, even for legend Stevie Nicks. "This is Show 91!" screamed Nicks huskily, admitting that on many levels this was a truly amazing feat. Hits continued to be played early on: Dreams was given some minor alterations, while Everywhere saw Christine McVie take lead vocals on the classic track she penned in 1987, although the band's three-part harmonising was the main draw.

An acoustic set began with Lindsey Buckingham's contemplation on alienation (otherwise know as Big Love) which he disclosed mirrors the breakdown the band experienced at the height of their "recreational" activities. Gypsy, Little Lies and Go Your Own Way were the highlights of the closing section, although an extended Gold Dust Woman was played like a rebirthing of Nicks and Buckingham's I'm So Afraid guitar solo brought a much-needed crescendo.

ACCORDING to the traditional concert closing remarks of Fleetwood Mac’s resident ringmaster Mick Fleetwood, “the Mac is most definitely back” - and now these MOR giants come with added Christine McVie.

The singer/pianist has rejoined the line-up after a sixteen-year absence and immediately made her leavening presence felt on the close harmony of opening number The Chain.

Her simply stated love songs, such as the sweet, girlish Everywhere and mellifluous Little Lies, made a welcome comeback to the setlist, providing a charming contrast to Stevie Nicks’ more melodramatic, impressionistic numbers - though the absence of Songbird from this show’s setlist was a great shame.

The eternal hippie chick Nicks was in her theatrical element, donning a black feathery shawl for extra gothic ambience on Rhiannon – though it hardly needed an atmospheric boost with Lindsey Buckingham’s burnished guitar and the ethereal harmonies as embellishing features.

Buckingham, meanwhile, was energised throughout, limbering up those fleet fingers to deliver an athletic, acoustic Big Love which climaxed with a primal yelp.
Nickslive at Wednesday, June 17, 2015
Share