A wild-eyed genius named Mick Fleetwood says it better than I ever could as Fleetwood Mac exit the
stage - “The Mac is BACK!” 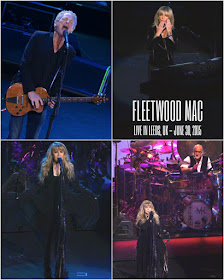 A blistering two hour and 20 minute set from the classic (yes, that word is ENTIRELY appropriate) Rumours-era line-up elicits one of the most passionate responses I have seen from an audience in my life.

A four-song opening shot from said record that made them famous the world over was always going to put us on the right foot.

The Chain, all close harmonies and blues guitar gives way to one of the most memorable of bass lines and Leeds is all theirs. You Make Loving Fun, Dreams and Second Hand News are all delivered as they should be, note perfect and intense.

Highlights come from their front people throughout however.

Returning from a 17 year hiatus from music, Christine McVie still has the voice of an angel, as evidenced by set-closer Songbird and Everywhere.

Lindsay Buckingham storms around the stage like a man a quarter of his age, his distinctive finger-picking guitar style as ferocious and precise and it ever was. His solo-rendition of Big Love was a thing of majesty,

Best of all is centre-stage throughout. Stevie Nicks, 67, still mops the floor with any other front woman out there. During Gold Dust Woman she does not just command the stage but dominate it,

The highlight for this humble reviewer is Landslide, performed by the couple Buckingham and Nicks, whose well-documented fallings-out inspired so much of their greatest art, is tear-jerking. Stevie owns the spotlight, a magisterial performance.

Despite Mick’s bullish claim we will most-likely never see these five together again. But tonight’s gig capped a truly unique and inspirational career and cemented their legacy as one of the most special and unique rock n roll bands of all time.

The Mac is back? The Mac never left us and never will.
Nickslive at Tuesday, June 30, 2015
Share