Mick Fleetwood Interview: This may be John McVie's final tour

Fleetwood Mac’s John McVie: This might be my final tour
By Annette Sharp
The Daily Telegraph 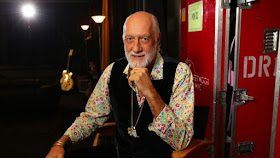 TWO years after pulling the pin on their 2013 Australian tour following bass player John McVie’s cancer diagnosis, Fleetwood Mac’s most famous and most successful line-up landed in Sydney this week ahead of what McVie has indicated might be his last tour with the band that bears his name.

Founding member Mick Fleetwood, 68, was respectful when he spoke of McVie’s recent health crisis during a sound check at Allphones Arena yesterday.

“I raised a toast the other night with Christine (McVie). He’s well as well, absolutely (in) tip top health and that’s pivotal. And outside of it, it’s great to be here and playing.

“It’s a revisitation,” Fleetwood enthused of his 69-year-old creative partner with whom he founded the band in 1963.

“John’s very practical. He didn’t get into it (cancer talk) one way or the other. I’m an old drama queen but John just said, ‘OK, let’s get it fixed’ and that was that. Never heard any more about it and it was fixed, and we’ve been on the road ever since.”

In May, McVie said his playing days would soon be at an end: “How much longer can the Mac be a working band? Not much longer, for me anyway. It’s not the music. It’s the peripherals, the travelling. Mick will go on until they put him up against a wall and shoot him.”

The return to the line-up of McVie’s ex-wife, singer and keyboardist Christine, 72, who parted ways with Fleetwood Mac in 1998 and was retired from the music business, has been described by guitarist Lindsey Buckingham as “really beautiful”. Buckingham also quit the band for 16 years from 1987 to 2003.

“(Christine) just sort of woke up and said, ‘I’m not done. I want to be more alive’,” Fleetwood said.

Fleetwood acknowledges relations within the band, which includes three
ex- couples — Buckingham, 66, and singer/songwriter Stevie Nicks, 67, the McVies and Fleetwood and Nicks — are still fiery 40 years after the most famous Mac five first collaborated in 1975.

“I don’t think Lindsey and Stevie will ever not be able to suppress various emotive buttons that exist. One lives in hope, as I think they do,” he said of the former lovers, who started working together at 16.

“Having Chris back is hugely amazing. I think Stevie’s loving it and Chris is, too.

Touring the world was “sort of” easier today, added Fleetwood, whose battle with cocaine addiction is the stuff of rock legend. (He once estimated that, laid end to end, the cocaine he consumed during his life would stretch seven miles).

‘‘Those, looking back on it, were sort of a bit harder. Harder to juggle feeling good and being professional. Those days are long gone.’’

Fleetwood says this time there will be only just the occasional “little jug” of wine during this tour.