Fleetwood Mac fans cheer, laugh, cry and show love for the band on their Australian tour
by Kathy McCabe
The Daily Telegraph 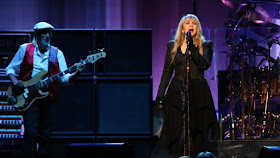 IF you could harness all the energy devoted to singing Fleetwood Mac songs in loungerooms, cars and bars over the past 40 years, it would create a mighty bang.

The audience at the opening Australian concert by the legendary band at Sydney’s Allphones Arena brought an energy powered by all those moments, whether a solo karaoke of their favourite song, perhaps Go Your Own Way, or the more universally sung-to-the-rafters Don’t Stop.

Their myth is rooted in the reality of their drug-fuelled romantic entanglements and bust-ups as documented so honestly and historically on the greatest breakup album of all time Rumours.

Full Review and photos at The Daily Telegraph


The executive summary would be accurate but also not ever enough: too long and inconsistent of energy; some good sections and a virtual Classic Hits radio playlist; another "seriously, what the ... ?" moment with a drum solo and Christine McVie. Yes folks, it's worth an exclamation mark, Christine McVie!

The return, after 16 years, of the longest songwriting contributor in the band was always going to be more than just another body to accommodate onstage and a few more songs to add to the setlist. McVie's songs, from You Make Loving Fun - appearing two songs in, between Lindsey Buckingham's The Chain and Stevie Nick's Dreams, in the democratic/pragmatic structure long necessary in this complex band - to the show's closer, Songbird, with her at piano and only Buckingham on guitar accompanying her, are not just standards.

They, and she, are also the temperamental, lyrical and melodic balancing point between the very yin and definitely yang of the band's dominant forces, Nicks and Buckingham. That fractious pair these days make a deliberate, almost ostentatious, point of acknowledging each other, even singing to each other. But the more comfortable and frequent interactions are between Nicks and McVie, and Buckingham and McVie.