The title of Fleetwood Mac's current 15-month world tour 'On With The Show' felt especially fitting as the heavens opened above Mount Smart Stadium in Auckland last night in a pre-summer monsoon. 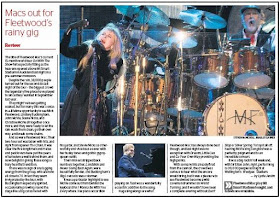 But the rain did little to dampen the spirits of the 38,000 people who'd turned out for the second to last night of the tour - the biggest crowd the legendary five-piece have played to since they reunited in September 2014.

They might've been getting soaked, but for many this was a once in a lifetime opportunity to see Mick Fleetwood, Lindsey Buckingham, John McVie, Stevie Nicks, and Christine McVie all together once more, and they were ready to let the rain wash them clean, go their own way, and break some chains.

And so were Fleetwood Mac. Their two hour set was laden with hits, and right from opener The Chain, it was clear the five longtime band mates and past lovers have put the years of turbulence well behind them, and now delight in giving these songs a truly heartfelt rendition.